Eagle Ford Shale oil and natural gas production generated more than $87 billion in economic output for Texas last year, and that contribution to the state’s economy is projected by researchers to grow to $137 billion by 2023. 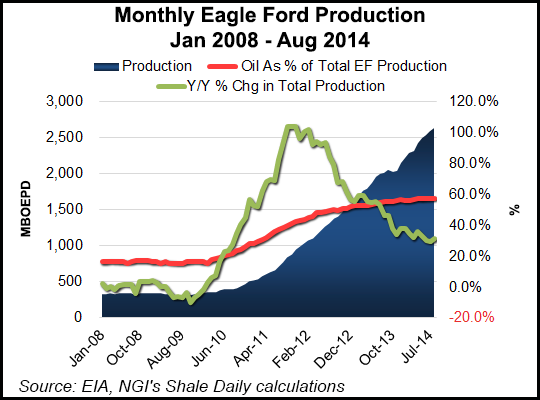 In its latest analysis of Texas upstream activity and its economic impact, the University of Texas at San Antonio (UTSA) Institute for Economic Development looked at the Eagle Ford Shale. Researchers concluded Eagle Ford activity in a 21-county region around the play supported almost 155,000 full-time equivalent jobs and provided more than $4.4 billion to local and state governments last year.

UTSA projected that by 2023 the Eagle Ford region will support more than 196,000 jobs. New estimates of the play’s contribution exceed what was projected in previous studies due to the attraction of new manufacturing projects associated with natural gas and additional processing, refining and port facilities, researchers said. “The economic output of the region is forecast to continue solid growth long term, considering current trends of stable energy prices and industry innovation,” they said.

“The immense economic development is providing the wherewithal to address needs that are important to both industry and communities,” said UTSA’s Robert McKinley, associate vice president of economic development. “Investments in infrastructure — roads, water, wastewater, education, medical facilities and other things — are the key foundational components needed to ensure the long-term viability of many rural communities in the region.

For 2013, the oil and gas industry in the Eagle Ford is estimated to have generated impacts of nearly $72 billion in the core 15-county area. The industry supports almost 115,000 full-time equivalent jobs in those counties or the bulk of the job growth in the 21-county area, while contributing slightly more than $2 billion in revenues to the 15 counties or about half the $4.4 billion going to local and state governments in the larger area. The researchers calculated that 3,311 wells were completed and actively producing in the core area during 2013.

Oil and condensate production in the Eagle Ford Shale has grown from 581 b/d in 2008 to more than 1.5 million b/d as of August, according to the researchers. Growth is continuing to exceed expectations and attracting more capital investments than any shale field in the United States, the researchers said.

“The ongoing activity — driven by energy companies and related industries — presents South Texas community leaders with a rare opportunity to ensure the long-term viability of their cities, towns and counties,” the study said.

“As the natural gas, oil and condensate production in the Eagle Ford continues to increase, the challenges facing community leaders are more critical than ever. Investments in infrastructure — roads, water, wastewater, K-12 education, medical facilities, etc. — are the key components that will provide the necessary foundation to ensure future sustainability of communities in South Texas.”