Duke Energy has shut its 625 MW Sutton natural gas plant in Wilmington, NC, after Cape Fear River flooding resulting from Hurricane Florence, which made landfall as a Category one storm just south of Wrightsville Beach Sept. 14, caused breaches in the cooling lake dam, the company said. 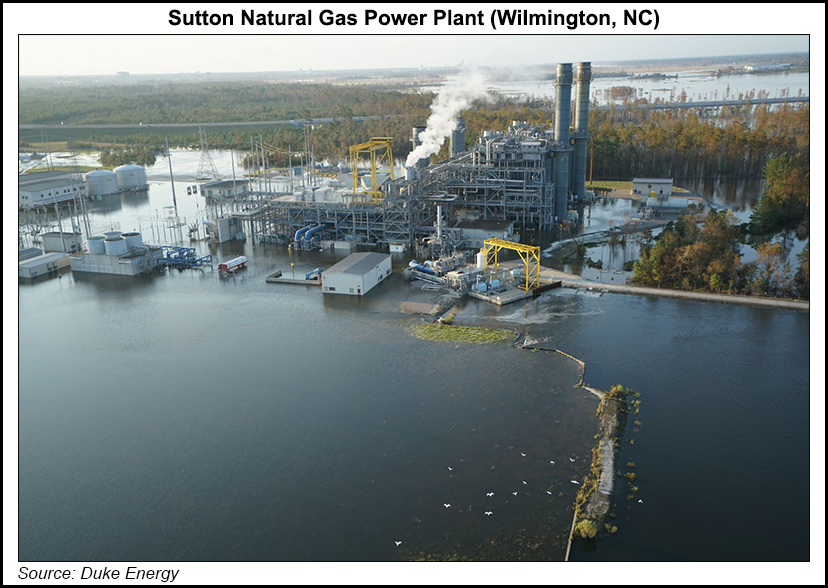 The rising river, located in east-central North Carolina, continued on Friday to overtop the north end of the cooling lake dam, a surface that is protected by a layer of compacted soil and cement, Duke said. Water was exiting the cooling lake through breaches — one large and several smaller — on the southern end of the impoundment. The cooling lake water also flowed into the natural gas plant footprint.

Sutton Lake is an 1,100-acre man-made reservoir constructed in 1972 to supply cooling water to the Sutton power plant. The cooling lake does not store coal ash, however, there are two coal ash basins at the site. The company believes that ash in one of those basins remains in place behind a steel wall separating the excavation area from the cooling lake.

“That wall is submerged by flood water, but the earthen portion of the basin dam is about two feet above water and stable. There is no visible ash in the cooling lake, and prior to flooding the ash level was at least five feet below the top of the steel wall,” Duke said.

“Site personnel are supplementing onsite supplies with large stone and other materials, engineering experts are moving to the site and personnel continue to develop and activate repair plans,” Duke said.

National river conservation organization American Rivers said its staff in the region was ready to assist Carolina communities with “lasting river restoration and flood protection solutions as they clean up and rebuild.

“More than 100 failed dams over the past three years make it clear that our current standards, especially for earthen dams which are by far the most likely to fail, do not provide safety with the reality of today’s extreme flooding,” American Rivers president Bob Irvin said.

Despite Florence’s weakening as it moved closer to shore, the storm caused widespread flooding along a long stretch of the North Carolina coast, from New Bern to Wilmington. As the storm moved inland, heavy rain inundated multiple cities and major rivers, with several spilling over their banks. The city of Wilmington was cut off entirely from the rest of the mainland by floodwaters as some areas received more than 30 inches of rain.

An estimated 1.8 million Duke customers were without power following the storm, but the company has since restored to power to all but 49,000 of them. Most of those customers are located in coastal and inland areas that experienced “historic flooding, multiple road closures and significant structural damage,” Duke said.