Pennsylvania natural gas production increased 4.8% year/year in the third quarter to reach 1.326 Tcf, keeping 2017 volumes on track to surpass those of last year, according to the state’s Independent Fiscal Office (IFO). 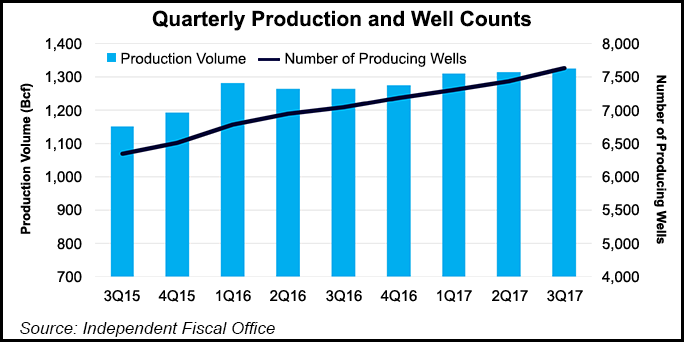 Third quarter production was up from the 1.266 Tcf produced in 3Q2016 and also from 1.316 Tcf produced in 2Q2017. The IFO’s quarterly report is compiled with data collected by the Pennsylvania Department of Environmental Protection, which oversees oil and natural gas development.

As they have in recent quarters, producers continued to lean on drilled but uncompleted (DUC) wells to help grow volumes. The IFO said most of the quarterly production gains came from wells spud in 2015 and 2016. There were 8,073 producing wells during the period, up from 7,391 in the year-ago quarter.

Driven by unconventional wells, drillers reported a record 5.1 Tcf of production in 2016, which was an 11% increase from the prior year. The IFO currently estimates that total production volumes in 2017 should reach 5.3 Tcf.

Year-to-date, gas production is 3.962 Tcf, again putting Pennsylvania behind Texas as the nation’s second largest gas producer for the period. The report indicated Texas production through the first eight months of this year was about 5.178 Tcf.