DTE Energy is proceeding with plans to retire eight coal-fired generation units at three locations in Michigan over the next seven years, replacing them with a mix of generation including natural gas and renewables, the Detroit-based company said. 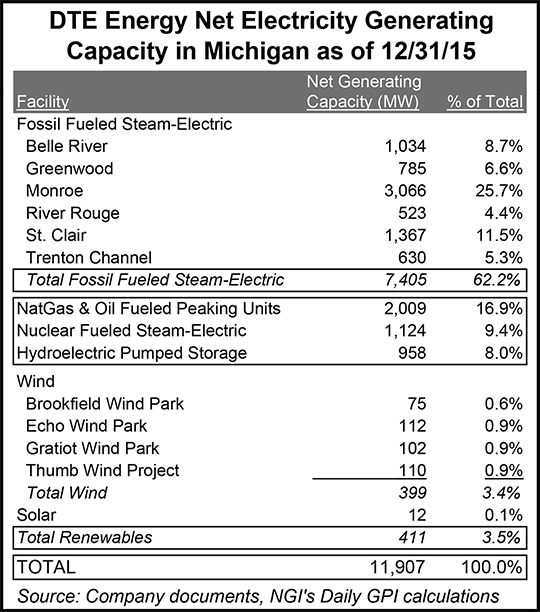 DTE said last month that it planned to close the River Rouge facility, the St. Clair facility in East China Township and the Trenton facility, which generated about a quarter of the electricity produced by the company in 2015, between 2020 and 2023. That would leave only six coal-fired units in DTE’s generation fleet. DTE retired three other coal generating units earlier this year due to age and projected costs.

“Much of this coal-based generation will be replaced with natural gas generation,” CEO Gerard Anderson said during a 2Q earnings conference call with analysts Tuesday. “But we also intend to continue to invest in wind and solar to ensure that we keep the mix in our portfolio that we want…

Over the past five years, DTE has built significant renewable energy production, which now accounts for 10% of the company’s total sales.

“We expect the final EIS by the end of November, and that would allow for a certificate of construction by the end of February of 2017, which would set us up nicely for the November in-service date next year,” Anderson said.

The $2 billion, 1.5 million Dth/d Nexus project would supply markets in Ohio, Michigan and the Dawn Hub in Ontario with natural gas from Appalachia (see Daily GPI, Nov. 23, 2015). The project would relieve capacity constraints in the Marcellus and Utica shales and is supported by capacity commitments from producers as well as local distribution companies, Spectra said.

“Right now the pipe is two-thirds filled and the environment, as we see it, is starting to improve significantly in that region, in the production regions that Nexus serves our gas pipes,” said COO Gerardo Norcia. “So we’re seeing renewed interest in terms of discussions from the producers, [and] we’re progressing a series of conversations along the pipeline in Ohio and in Michigan and other markets — in Ontario, as well as other parts of the Midwest, where customers are interested in subscribing for capacity. So we’re confident that by the time the pipe goes into service, we will have more market commitment for this pipe.” Talks in the Midwest have primarily been with other local distribution companies, Anderson said.

Outside of the United States, Nexus would contract for existing capacity on the Vector Pipeline LP system to provide service from the U.S.-Canada border to Dawn.

Nexus has agreements with seven shippers for a combined 835,000 Dth/d of the project’s capacity.