A unit of DowDuPont (Dow) on Thursday said its world-scale ethylene production facility and enhanced polyethylene (PE) production plant in Freeport, TX, considered the backbone of a $6 billion buildout on the Gulf Coast, have begun operations. 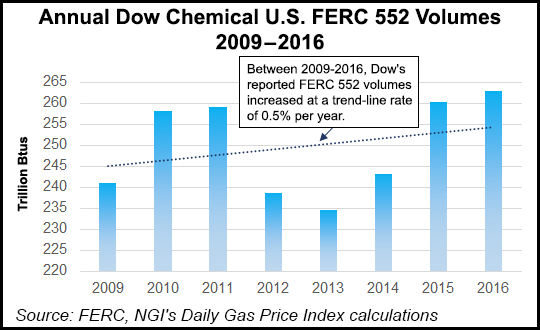 Both Freeport units are to ramp up supply through the third quarter and reach full rates by the end of the year. The ethylene facility, considered the central component of the growth strategy, initially has nameplate capacity of 1.5 million metric tons (mmt). The 400,000 metric ton Elite PE production unit is the first of four derivative units planned at Dow manufacturing sites in Texas and Louisiana.

“This is a monumental moment for Dow as we advance our global growth strategy by fully deploying our unmatched molecular and physical integration,” said Dow CEO Andrew Liveris. “These facilities are an integral part of Dow’s investments on the U.S. Gulf Coast to meet increasing consumer-led demand in our core market verticals of packaging, infrastructure and consumer care, and will enable our next level of earnings and cash flow growth.”

As part of Dow’s next wave of growth investments, the ethylene unit would be expanded to 2 mmt, making it the world’s largest ethylene facility. The additional expansions, worth an estimated $4 billion over five years, include a 600,000 metric ton PE unit on the Gulf Coast and another Texas ethylene cracker.

“As we ramp these units to full production, we continue to solidify our early-mover advantage while significantly increasing our integration and growing our U.S. production capacity,” said DowDuPont Materials Science COO Jim Fitterling. DowDuPont eventually plans to launch the Materials Science division as an independent, publicly traded company.

“Dow’s new ethylene facility provides a solid, capital-efficient base in this attractive, feedstock-advantaged region, which will continue to fuel the industry’s broadest and most differentiated derivatives slate,” Fitterling said.

Dow has other derivative assets scheduled to come online on the Texas and Louisiana coasts late this year and into 2018.

Earlier this week Chevron Phillips Chemical Co. LLC said two PE units at Old Ocean east of Houston in Brazoria County had begun production, with each able produce up to 500,000 metric tons/year. The units, which achieved mechanical completion in June, are part of a wave of massive petrochemical expansion underway by Chevron Phillips and others on the Gulf Coast.