A modular nuclear reactor could generate power for a Dow Chemical Co. manufacturing facility on the Gulf Coast within the next decade under a potential deal with nuclear technology developer X Energy LLC 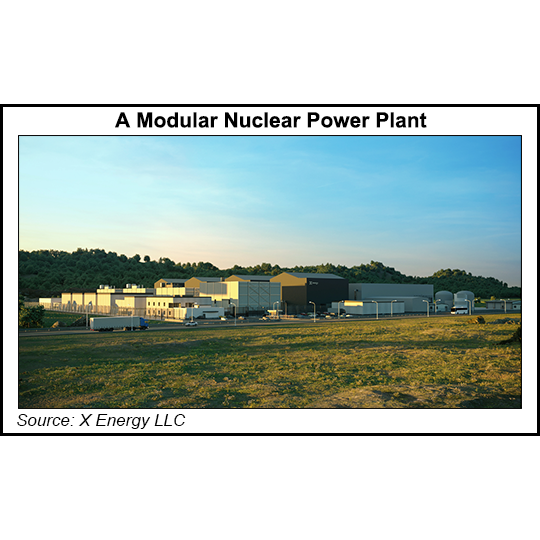 A letter of intent (LOI) was signed by Dow and X-energy, as it is known, to consider deploying the nuclear developer’s Xe-100 technology. The unit could provide process heat and power at a Gulf Coast site not yet identified.

“Advanced small modular nuclear technology is going to be a critical tool for Dow’s path to zero-carbon emissions and our ability to drive growth by delivering low-carbon products to our customers,” said Dow CEO Jim Fitterling.

Many manufacturers rely on natural gas to fuel their facilities, but alternative sources could provide a cushion against gas price volatility. Chemical plants also process natural gas liquids feedstocks such as ethane.

The project, if sanctioned, could be operational by about 2030, the companies said. Dow also plans to take a minority equity stake in X-energy.

Each small scale reactor is able to run as an 80 MW unit. In an optimal four-unit setup, 320 MW could be generated.

X-energy’s spokesperson Robert McEntyre told NGI that some hard-to-abate industries are exploring ways to add nuclear to existing operations as they work toward zero- and low-carbon emissions goals and benchmarks.

“Because of the smaller footprint of advanced nuclear energy, we’re often able to co-locate new nuclear plants alongside existing or legacy manufacturing facilities, reducing the potential capital investment required to deploy a project,” he said.

“In addition to supporting new opportunities for deployment across the country, this historic act will promote zero-carbon technologies in every sector of the economy,” he said.

The IRA would “strengthen energy security through a robust nuclear energy supply chain, and enhance the scale and pace of adoption of critical decarbonization tools like advanced nuclear energy.”

“Because of its portrayal in popular culture, media, and film, nuclear safety has always weighed as one of the top issues surrounding the industry,” said McEntyre. “Next-generation nuclear technology hopes to allay these concerns by designing and engineering the reactor to be safe from the inside out.”

X-energy said its compact reactor is “meltdown-proof” and is a “total reimagining of what a nuclear reactor can be.” The technology uses thousands of billiard ball-sized “fuel pebbles.” Each fuel pebble comprises thousands of TRi-structural ISOtropic, aka TRISO, particles. A TRISO particle contains microscopic kernels of uranium encased in “three indestructible layers of carbon,” according to X-energy.

“These coatings enable the pebbles to retain 99.9% of all fission by-products, making the pebble a containment vessel in itself,” said McEntyre.

The firm noted that fuel pebbles generate energy by being continuously gravity-fed through the reactor core, enabling the reactor to run uninterrupted for 60 years.

According to X-energy, the modular technology reduces the need for “massive containment facilities” used at conventional nuclear plants.

Work is ongoing to enhance the economics and safety of X-energy’s modular reactor technology, said McEntyre.

“X-energy is working with its supply chain partners, vendors, and constructors to complete final design to better optimize delivery and deployment, costs, and timelines,” he said. “Over time, we expect per unit costs to flatten in response to the robust supply chain we’re working to develop.”

The U.S. Department of Energy in 2020 awarded X-energy $80 million in initial funding to build a commercial four-unit Xe-100 power plant in the state of Washington.

McEntyre said the power plant would be “among the first operational grid-scale advanced reactor plants in North America.”

Baker & O’Brien Inc.’s Cliff Moore, a Houston-based senior consultant, told NGI that large petrochemical firms such as Dow have the internal know-how to integrate nuclear power into their utility programs.

“They possess mature management systems and process safety programs necessary to operate within the heightened regulatory requirements,” he said. “They are familiar with advanced process control and operating complex processes safely and reliably.”

Moore added that operating and maintaining a nuclear reactor would not represent a significant technical challenge for large petrochemical plants.

“A practical challenge is adapting to the radiological safety protocols required for nuclear operations, which would take some time and effort to implement but fits in well with the already existing safety culture of the petrochemical industry,” he said.

Externally, however, chemical companies would need to contend with foes of nuclear energy, noted Moore.

“The primary challenge petrochemical manufacturers face is overcoming the negative public perception of nuclear power,” he said. “Their current effort to assuage concerns over plastics production becomes more complicated with the addition of nuclear fear.”

Moore added that large chemical firms are exploring other low-carbon energy sources, with companies such as BASF SE, Ineos Group and others joining Dow to secure renewable energy supplies globally. He singled out hydrogen as a particularly noteworthy option.

“Clean hydrogen is also an area of significant exploration for these companies,” he said. “Hydrogen is a natural play for petrochemical companies because a number of their facilities produce hydrogen as a co-product. Converting that hydrogen into carbon-free power is the next logical extension.”