Led by a surge in rigs flooding into the Permian Basin, the U.S. rig count climbed 16 units to finish the week ended Friday (April 8) at 689, updated figures from Baker Hughes Co. (BKR) show. 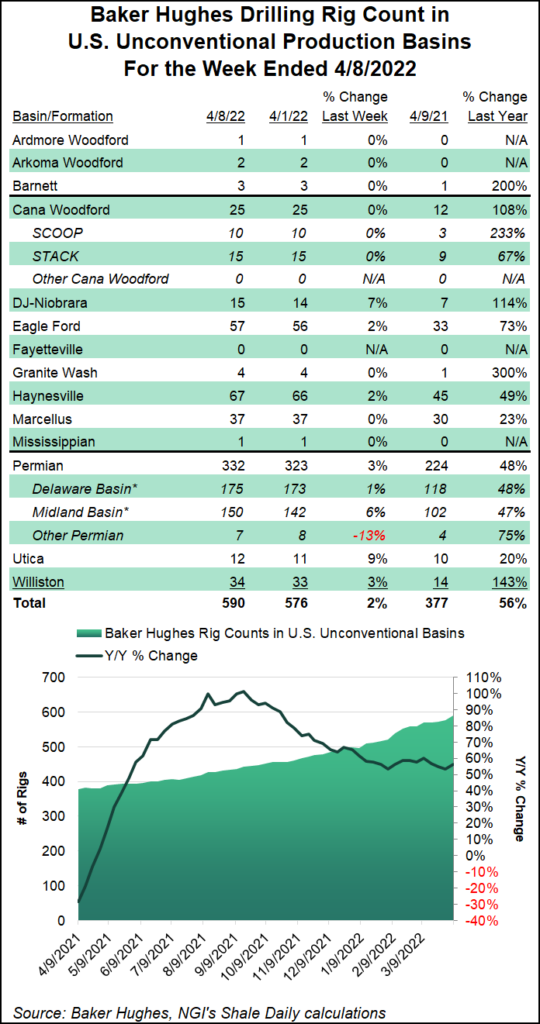 Oil-directed rigs increased by 13 in the United States for the week, while three natural gas-directed units were also added. The combined U.S. rig count ended the week more than 250 units higher than the year-earlier tally of 432.

Land drilling increased by 18 units for the period, partially offset by a two-rig decline in the Gulf of Mexico. Eighteen horizontal units were added domestically, along with one vertical rig; total directional rigs fell by three, according to the BKR numbers, which are partly based on data from Enverus.

The Canadian rig count fell 13 units to end the week at 111, versus 58 in the year-ago period. Oil-directed rigs declined by 11 units, with natural gas-directed rigs down two.

Broken down by region, the Permian Basin added nine rigs during the week, increasing its tally to 332, versus 224 at this time last year. Elsewhere among plays, the Denver Julesburg-Niobrara, Eagle Ford Shale, Haynesville Shale, Utica Shale and Williston Basin each added one rig to their respective tallies.

In the state-by-state count, Texas saw its tally surge 11 units to 342, while Colorado, North Dakota, Ohio, Oklahoma and Wyoming each added one rig for the period.