Dominion Resources Inc. has recently begun talking about a preliminary idea to pipe Marcellus/Utica shale gas from West Virginia, through Virginia to southern North Carolina via a pipeline that would be called the Dominion Southeast Reliability Project. 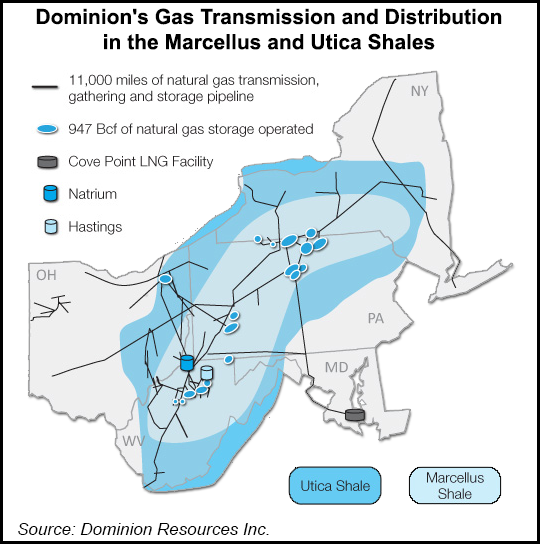 If the company decides to construct the pipeline, it could be in service as early as the end of 2018. Southeast Reliability would interconnect with Dominion Transmission in Harrison County, WV, and run through Virginia to Lumberton, NC.

The project could include a 70-mile spur to Hampton Roads, VA, and possibly a short pipeline to serve the Brunswick Power Station, a 1,358 MW plant in Brunswick County, VA, that is being developed by Dominion Virginia Power. Such a lateral would be a second feed to the plant in addition to a feed from Williams’ Transcontinental Gas Pipe Line — Transco.

The project is in its very early stages, spokesman Jim Norvelle told NGI. Dominion has begun notifying landowners along the potential pipeline route to let them know that surveyors would be on their property, he said.

“This project is so very preliminary…Because we’re contacting landowners, we had our government affairs team begin contacting local boards of supervisors and county commissioners in the three states so that they would have high-level information; this is something we’re considering; we’re looking at it…In case you get a phone call from a constituent, you’ll know what this is all about.”

Some of those local officials expressed enthusiasm for the project and the potential boost to economic development efforts it could bring, Norvelle said.

Length of the pipeline, capacity, cost and other details have yet to be determined. An open season for the project concluded May 9 (see Daily GPI, May 5), but Dominion is not making results available.

On the market end of the pipeline, customers are mainly expected to be larger commercial and industrial end-users, along with some local distribution companies, Norvelle said.

“We certainly know that there is interest in getting an abundant supply of Marcellus Shale natural gas to other areas of the country that are constrained…” he said. “Both Virginia and North Carolina are growing states, population-wise. They’re good states for jobs. So I think this could be just a good old shot in the arm.”

A similar proposal, also in early stages, that would carry gas from the Marcellus to North Carolina recently was unveiled by Spectra Energy (see Shale Daily, May 20). Based on a Spectra pipeline study, the 36-inch diameter pipe would extend 427 miles into Maryland, Virginia and West Virginia before terminating in North Carolina. It would have capacity of up to 1.1 Bcf/d.