Dominion Energy isn’t throwing out the old (fossil fuels generation) for the new (zero-carbon investments) but the executive team is mounting what may be the industry’s largest regulated decarbonization investment ever. 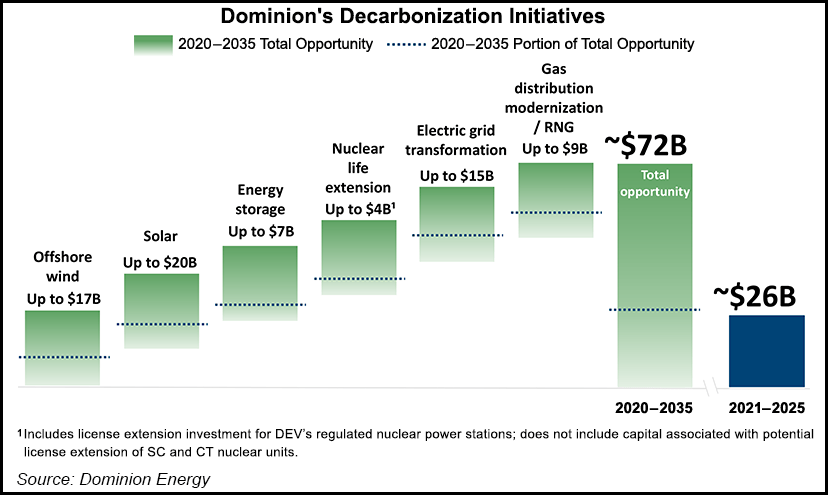 Executive Chairman Tom Farrell, CEO Bob Blue and CFO Jim Chapman shared a microphone earlier this month to discuss fourth quarter and full-year 2020 results. As important, they laid out their goals for the five-state utility as it segues to a green future.

Over the next 15 years, Dominion expects to invest about $70 billion in “green capital,” Blue said. At the same time, the goal is to reduce emissions while maintaining competitive customer rates.

“We don’t believe any other company in the United States offers the duration, visibility and scope of regulated decarbonization growth that Dominion Energy now offers,” Blue told analysts during the conference call.

The Richmond, VA-based giant has growing renewables projects to complement the natural gas, coal and nuclear operations. Most utility operations are in Virginia and the Carolinas, with operations also in Ohio and Utah. Overall, more than seven million customers in 16 states energize their homes and businesses with Dominion’s electricity or natural gas.

Another $6 billion would be earmarked for electric grid enhancements, such as electric transmission and grid modernization to become more resilient to “cyber and climate threats and more responsive to increasing intermittent generation.” In addition, $3 billion is budgeted to upgrade the local distribution companies and for RNG projects.

“Our initiatives extend well beyond our five-year plan,” Farrell said. “We have identified over $70 billion of green investment opportunity between 2020 and 2035, nearly all of which will qualify for regulated cost of service recovery.”

Still, natural gas remains an important part of the puzzle.

The gas utilities “operate in some of the fastest growing areas of the country, with annual customer growth rates approaching 3% in two of our three largest markets,” Blue said. “These customers simply prefer natural gas service for cooking, heating, and other residential, commercial, and industrial applications. We’re also fortunate to operate in jurisdictions where regulation prioritizes safety and reliability…

“When it comes to natural gas distribution, location matters. We know that for natural gas to be relevant in the future, we must continue to focus on increasing the sustainability of our service.”

In February, Dominion set a goal to become net zero-carbon by 2050, under the banner to advance environmental, social and governance (ESG) initiatives.

Scope 2 greenhouse gas emissions are indirect sources owned or controlled by a company, while Scope 3 are from sources not owned or directly controlled.

Dominion has thrown its support behind an effort for the federal government to regulate methane emissions. It also is “working toward procurement practices that encourage enhanced disclosures by upstream counterparties on their emissions and methane-reduction programs,” Blue said.

In addition, management is “considering a preference for suppliers and shippers who adopt a net-zero commitment.” This year the focus is to address Scope 3, “firstly in our gas distribution businesses.”

For downstream emissions, Dominion plans to up its annual spend over the next five years by 45% to improve energy efficiencies, as well as provide customers with “access to a carbon calculator and carbon offsets.”

In addition, work continues to increase access to RNG and initiate mandatory blend levels “that would act to offset our customers’ carbon footprint.” Another growth area is in hydrogen, Blue said.

“We are taking steps today to chart a course that over the next decades will put our company on a remarkable journey to becoming the most sustainable energy company in America.”

In its headquarters state, plans are tied in part to the Virginia Clean Economy Act (VCEA), which mandates a renewable energy portfolio standard that over the next 25 years moves toward a zero-carbon future.

“The largest single investment project to come out of the passage of the VCEA is Dominion Energy’s initial 2.6 GW offshore wind deployment,” he said.

“It will also propel Virginia closer to achieving its goal to become a major hub for the burgeoning offshore wind value chain up and down the country’s East Coast.”
Dominion expects to receive final permits by mid-2023 with construction completion eyed for the end of 2026.

All of the alternative generation options are keyed to maintaining dependable service.

“As increasing intermittent generation sources proliferate in our system, energy storage will be critical to maintaining reliable service,” Blue said. “We observed with keen interest the recent example of the negative consequences that occur for customers when rapid changes in intermittent generation are not accommodated with sufficient storage and/or quick-start gas-fired generation.

“Hence, the VCEA prudently calls for the development of nearly 3 GW of energy storage by 2036, 65% of which is to be utility-owned and rider-eligible” for cost recovery. “Admittedly, we’re starting small when it comes to developing technologies in this area, 16 MW of pilot projects across three different sites and three different use case scenarios…But starting small has its advantages as we saw in both our offshore wind and solar development strategies.”

It’s a huge departure for Dominion. In 2005, more than half of its power production was coal-fired. “By 2035, we project that to be closer to 5%, perhaps lower,” if, for example, South Carolina regulators call for an “accelerated decarbonization plan.”

The diminished role for coal “plays in our financial performance, driven by facility retirements and noncoal investment,” the CEO said. “We’re mindful that this shift has the potential to be disruptive to employees and communities, and are being purposeful in our efforts to ameliorate any such negative consequences.

Dominion continues to set ambitious profits targets. The expectation is for 10% growth this year, with earnings up on average 6.5% “through at least 2025, supported by our updated $32 billion five-year capital growth plan,” Farrell said.

“We plan to invest tens of billions of dollars over the next several years to the benefit of the environment, our customers, our communities and our local economies. Our strategy is anchored on a pure-play, state-regulated utility operating profile that centers around five premier states…

“These states also strive to create environments that promote sensible economic growth, which like the rising tide, lifts all boats.”

It’s not enough for Dominion to provide energy safely, Farrell said. “We must also provide energy that is affordable…Looking forward, we expect our customers to be very competitive, even as we invest heavily to transform our system’s carbon footprint.”

The difference in earnings was attributed in part to a net loss from discontinued operations. Dominion last summer sold its transmission and storage assets to an affiliate of Berkshire Hathaway Inc. for $9.7 billion. With partner Duke Energy it also scuttled the 1.5 Bcf/d Atlantic Coast Pipeline.