U.S. petroleum use decreased for a third-consecutive week, with gasoline and jet fuel demand both declining during a period that, in typical years, is marked by heavy travel around the Thanksgiving holiday. 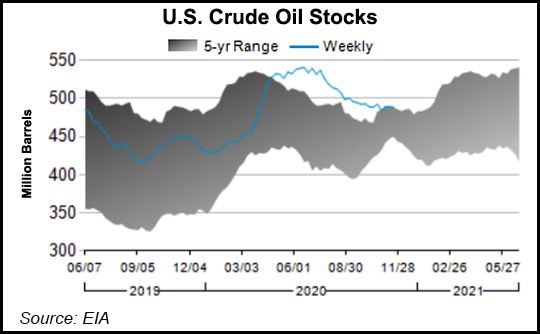 In its latest Weekly Petroleum Status Report covering the period ended Nov. 27, the Energy Information Administration (EIA) said Wednesday that overall petroleum demand fell 4% week/week and was 13% below year-earlier levels. On a year/year basis, jet fuel use was down 42% and gasoline was off 12%.

Nearly 50 million people traveled for the Thanksgiving holiday in 2020, the American Automobile Association (AAA) estimated, but that was 10% lower than a year earlier despite favorable weather this year and wintry conditions in 2019. The AAA estimate covers trips of 50 miles or more.

Analysts at Clearview Energy Partners LLC said that, comparing the latest Thanksgiving week to the average of the corresponding EIA covered weeks over the five prior years, jet fuel demand was down 31% and gasoline consumption was off 12%.

The culprit: Warnings against travel and group gatherings amid a surge in coronavirus outbreaks across more than 40 states. More U.S. cases were reported in November than any other month, Johns Hopkins University data show.

Overall domestic petroleum demand was down each of the two previous weeks as well, reflecting a broader response to the pandemic, according to EIA data.

Petroleum demand has ebbed and flowed on a week/week basis this fall, but it has consistently proven weak relative to year-earlier levels because of the pandemic. Analysts anticipate the trend will continue until vaccines are widely available. U.S. public health officials have said vaccines could be distributed this month, but widespread inoculations needed to end the pandemic could take several months.

“With vaccine headlines pushing equities to record highs, the oil market, while far from the same level of euphoria, has also staged a rally on expectations for an improved demand landscape in 2021,” Raymond James & Associates analysts said Wednesday. “Still, the oil market will first need to get through the difficult winter period, with Covid-related demand headwinds not going away anytime soon.”

Total petroleum stocks — excluding the Strategic Petroleum Reserve — increased by 200,000 bbl week/week and were 8% above year-earlier levels. That marked a shift, as petroleum stocks had previously declined every week since the period ended July 17, according to the Clearview analysts.

Globally, meanwhile, the Organization of the Petroleum Exporting Countries (OPEC) and its partners delayed until Thursday a decision on 2021 production that it had originally planned to make early this week.

The cartel and affiliated countries known as OPEC-plus failed on Monday to reach a consensus on whether to begin raising output in January after slashing production earlier in 2020 — by 9.7 million bbl/d — in response to pandemic-induced demand destruction and cratered oil prices.

The group of countries originally agreed to build production in increments of 2 million b/d, every six months. OPEC-plus moved ahead with the first increase over the summer as oil prices started to recover, but its members are divided on whether to take the next step in January because of a resurgence in virus cases in both the United States and Europe.

“At this juncture, a number of countries appear to support production increases, while others favor holding existing quotas constant” into 2021,” the Clearview analysts said. “We anticipate OPEC-plus could maintain its current production targets until April 1 or potentially July 1.”

OPEC in November scaled back its 2020 demand forecasts, saying it expected full-year global oil demand to fall by 9.8 million b/d from a year earlier. That marked a downward revision of 300,000 b/d from its report released in October.

For 2021, OPEC estimated that demand would expand 6.2 million b/d, though that outlook also reflected a 300,000 b/d drop from its previous forecast.