U.S. oil and gas drilling permitting has risen sharply from a year ago, but the gains are uneven, with the Denver-Julesburg (DJ) and Powder River basins drying up, while Haynesville Shale activity has increased, according to data compiled by Evercore ISI. 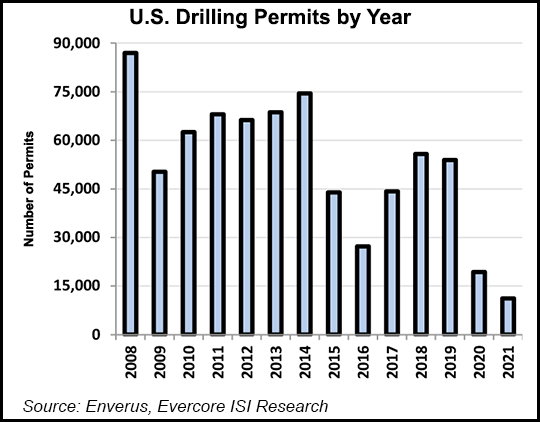 The domestic permit count climbed by 32% in June from a year earlier, and it was up 1% on a year-to-date basis, state and federal permitting data indicate. Still, permitting in May skidded by 23% month/month (m/m), and it was down another 6% in June, analyst James West and his team said in a note Tuesday.

However, activity climbed in the Mississippian Lime during June from May, up 16% or by 23 permits. Haynesville permitting rose by 12% m/m, with a gain of 13 permits. The other shale plays overall recorded a 32% increase m/m, with 44 more permits in June.

Meanwhile, California permits rallied while New Mexico’s tanked, according to Evercore. “California bounced back from last month’s dip to report the highest permit count out of all the states,” up 88% or by 43 permits from May. Still, permitting in the Golden State was down by 67% from June 2020 and off 63% year-to-date as “it continues to become less friendly” to unconventional drilling, Evercore analysts noted.

New Mexico, which shares a portion of the Permian with Texas, “experienced a sharp decrease” in June permitting, off by 40% m/m, or down 146 permits. However, the state was still up 30% in the first half of the year from the first six months of 2020.

A decline in permitting during June was recorded in Texas, down by 4% from May or by 25 permits. New York issued zero permits during June, down by 25 from May. Montana’s permit count plunged by 94%, down by 17.

“We are now analyzing employment trends as a leading indicator, namely the current number of employees in the mining support and oil and gas extraction industries provided by the U.S. Bureau of Labor Statistics,” analysts said.

“Following consistent year/year declines since August 2019, the month of May experienced a 2% m/m and 4% year/year increase for the number of mining support employees, which serves as a proxy for oilfield services.”

Notably, last month saw a 4% increase in industry hiring over May, with hiring up 10% from June 2020. The annual gains were attributed mostly to coming back from the pandemic.

The Department of Interior approved 2,500 requests to drill for oil and gas on public land in the first six months of this year, according to an Associated Press (AP) analysis of government data. The analysis published Tuesday noted that the Biden administration was on pace to approve the highest number of permits since President George W. Bush was in office.

The Biden administration has temporarily paused leasing on federal lands and offshore to review the program. However, operators may request permits to drill on approved leases.

Meanwhile, the Permian and Haynesville Shale are expected to spur an overall increase in natural gas production among the seven key Lower 48 producing regions in August, according to updated projections on Monday by the Energy Information Administration.