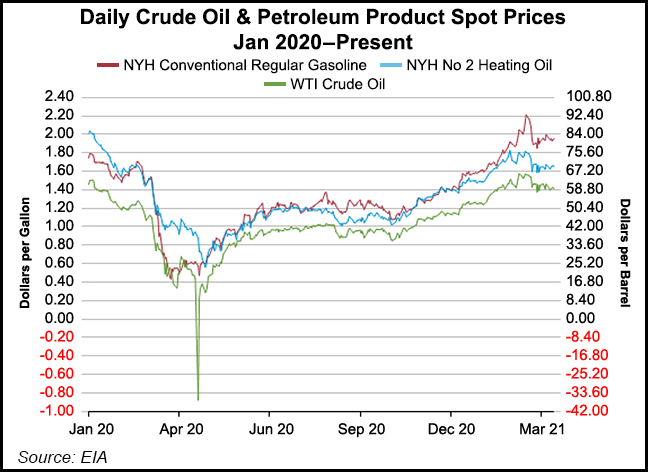 U.S. refineries operated at 85% of capacity last week, up a percentage point from the prior week and extending a recovery from the interruptions caused in February by Winter Storm Uri. Utilization had dropped to 56% in mid-February.

Average daily demand for finished motor gasoline was up 2% week/week and was essentially flat from the comparable week a year earlier. This marked a notable improvement from most weeks since the onset of the pandemic. With travel restrictions in place, gasoline demand often has been lower year/year.

Total demand over the last four-week period averaged 19.6 million b/d, up 20% from the same period last year, EIA said. Over the past four weeks, motor gasoline consumption averaged 8.8 million b/d, up by 37% from a year earlier. Year/year comparisons have begun to reflect both the virus-induced demand destruction realized in late March and April of last year, and gradually rising consumption this spring.

The International Energy Agency (IEA), meanwhile, on Wednesday raised its forecast for global oil consumption this year by 230,000 b/d to an increase of 5.7 million b/d, citing momentum in the United States and China, the world’s two largest economies. It pointed to a recent International Monetary Fund global forecast for 2021 gross domestic product growth of 6%.

The Paris-based IEA estimated oil demand in 2021 would reach 96.7 million b/d. It also said supply is on the upswing. World oil supply rose 1.7 million b/d in March to 92.9 million b/d after shut-in U.S. output recovered from the severe Arctic Freeze that crippled the Texas energy sector in February.

“Further gains from the U.S., Brazil and biofuels are set to lift global supply in April,” the agency said.

“The massive overhang in global oil inventories that built up during last year’s Covid-19 demand shock is being worked off, vaccine campaigns are gathering pace and the global economy appears to be on a better footing,” IEA researchers added.

While IEA’s forecast would leave demand about 3% shy of pre-pandemic levels in 2019, it joins a growing chorus of upbeat outlooks and increasing confidence in economic vigor this year.

Rystad Energy analyst Bjornar Tonhaugen on Wednesday noted that pandemic-related business restrictions still hinder swaths of the globe, notably including Europe. And while vaccine rollouts are proving effective, success is gradual and uneven. This week, for example, U.S. officials called for a pause on the use of Johnson & Johnson’s single-dose vaccine, noting that six women had developed blood clots within three weeks of receiving the shots.

“Despite the continuous set of new hurdles in navigating the vaccine and lifting of lockdowns, we still believe that, overall, optimism for economic recovery will drive oil demand to finish 2021 strong,” Tonhaugen said.

IEA’s new forecast followed an optimistic outlook for demand from the Organization of the Petroleum Exporting Countries (OPEC). The cartel on Tuesday projected demand would rise by 5.95 million b/d this year, a nearly 7% increase from 2020.

With demand expectations rising, the Saudi Arabia-led cartel and its allies, aka OPEC-plus, earlier this month agreed to ramp up crude production beginning in May. The group plans to increase output by 350,000 b/d in May and June, and then increase by as much as 450,000 b/d in July. Saudi Arabia also plans to begin reversing cuts it made earlier this year.