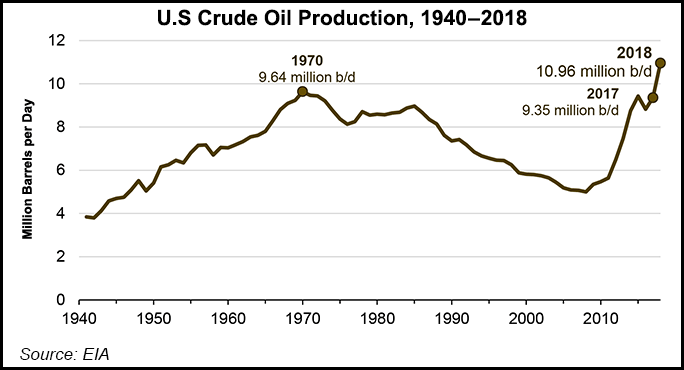 Annual U.S. crude production totaled 10.96 million b/d in 2018, up 1.6 million b/d (17%) compared with 2017, according to the agency, which said the most recent numbers continue a sharp growth trend over the past decade that coincides with the widespread adoption of horizontal drilling and hydraulic fracturing.

The recent spot price dynamics in West Texas — where pipeline constraints and liquids-focused economics have pressured sellers into paying to get associated gas out of the Permian Basin — offer a clear example of the potential for crude production trends to impact natural gas markets.

Texas remains the clear-cut leader in U.S. crude production, producing more than any other state or region and making up 40% of the nation’s output in 2018, according to EIA.

“Texas has held the top position in nearly every year since 1970, with the brief exception of 1988, when Alaska produced more crude oil than Texas, and from 1999 through 2011,” when Gulf of Mexico (GOM) production was higher, EIA said.

Crude production in Texas, home to a large chunk of the Permian, as well as the Eagle Ford Shale, averaged 4.4 million b/d in 2018 and set a record high monthly total in December at 4.9 million b/d, EIA said.

“Texas’s 2018 annual production increase of almost 950,000 b/d — driven by significant growth within the Permian region in western Texas — was nearly 60% of the total U.S. increase,” the agency noted.

Several other states or regions also set crude production records in 2018. Growth in the Permian drove a 215,000 b/d year/year increase in New Mexico.