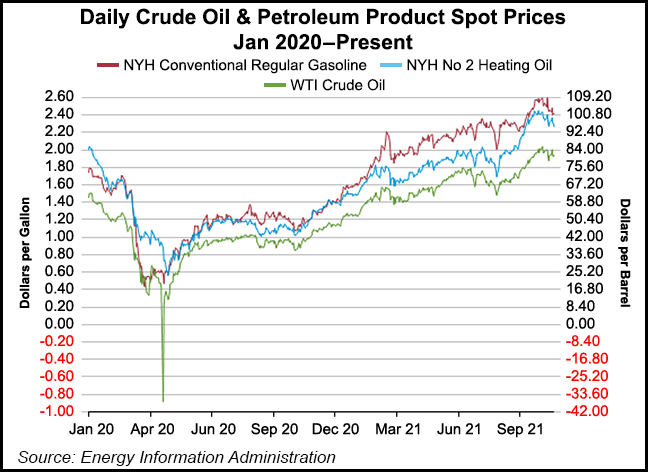 EIA said crude inventories for the week ended Nov. 12, excluding those in the Strategic Petroleum Reserve (SPR), decreased by 2.1 million bbl from the previous week. At 433.0 million bbl, stocks are 7% below the five-year average.

While choppy from week/week, demand has proven strong throughout 2021, especially when compared with a year earlier.

Meanwhile, production last week ticked down 11.4 million b/d from 11.5 million b/d the two prior weeks. Still, that was up from 11.3 million b/d for the week ended Oct. 22 and well above the 10.5 million b/d level of a year earlier, EIA reported.

Output for the year has climbed following strong demand through the summer and fall, and it is projected to continue rising through the end of this year.

The International Energy Agency (IEA) said Tuesday in its closely watched monthly Oil Market Report that it expects crude output to increase by 1.5 million b/d over November and December, with the United States joining Saudi Arabia and Russia as a key driver of increases.

IEA said U.S. producers are projected to account for 400,000 b/d of the gain. Saudi Arabia and Russia combined could account for 330,000 b/d over the two months. Total global supply increased 1.4 million b/d month/month in October, according to IEA.

Separately, the Organization of the Petroleum Exporting Countries (OPEC), led by Saudi Arabia, and an allied group headed by Russia – collectively known as OPEC-plus — began in August to increase production at a 400,000 b/d monthly pace. OPEC officials have said that, if increases continue at that level and the coronavirus does not intensify anew this winter, supply/demand balances should align early in 2022.

Additionally, IEA projected that the United States would account for 60% of 2022 non-OPEC-plus supply gains, forecast at 1.9 million b/d. “Even so,” researchers said, “the U.S. will not return to pre-Covid rates until the end of 2022.”

Why Did Biden Take Aim At Oil Producers?

While the coronavirus remains a wildcard that could interrupt demand this winter, President Biden has repeatedly called on producers – domestically and members of OPEC-plus – to increase output further in order to bring down oil prices and costs for consumers at the pump.

Brent crude prices, the international benchmark, are up nearly 60% this year, while U.S. gasoline prices this week were about 70% higher than a year ago.

The Biden administration is under pressure to tap the U.S. SPR to increase supplies — a move the president has said is being considered. The president also this week also called on President Xi Jinping to release additional oil from China’s reserves, noted Mizuho Securities USA LLC’s Robert Yawger, director of energy futures.

In a letter to FTC Chair Lina Khan, the president said there was “mounting evidence of anti-consumer behavior by oil and gas companies,” noting prices at the pump are high despite declines in unfinished gasoline costs.

“This unexplained large gap between the price of unfinished gasoline and the average price at the pump is well above the pre-pandemic average,” President Biden wrote. “Meanwhile, the largest oil-and-gas companies in America are generating significant profits off higher energy prices.”

Analysts shrugged off the allegations and noted that both IEA and OPEC this month forecast that global supplies were on track to align with demand by early 2022 – and prices are bound to moderate in coming months.

“Expectations for future balances are also met with the worrying rise of Covid-19 infections in Europe, which could land a blow to oil demand as restrictions are reinstated,” she said. “The multi-year record high prices that we saw lately could already have been the ceiling of this rally, as the market will transition to healthier balances in coming months.”

U.S. producers are increasing output but also are balancing those efforts with shareholder mandates to invest in renewable fuels. Meanwhile, OPEC-plus members earlier this month said they had no intention of further increasing production soon.