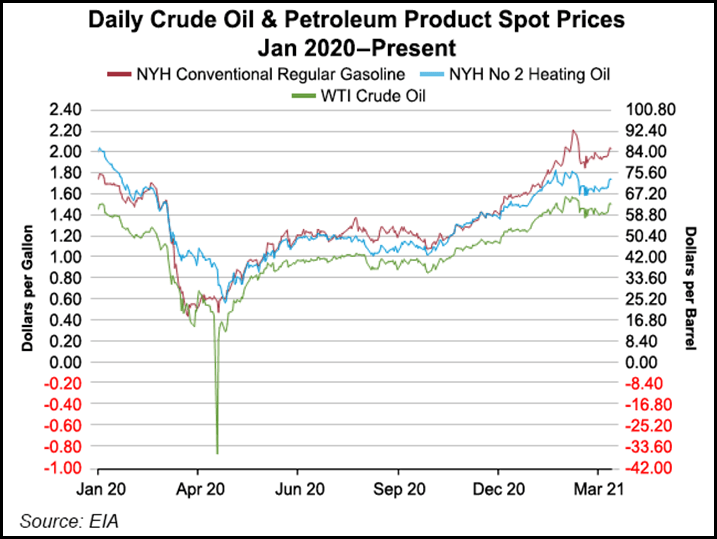 In its Weekly Petroleum Status Report (WPSR), the U.S. Energy Information Administration (EIA) said domestic crude inventories for the week ended April 16 rose by 600,000 bbl from the previous week. The total, which excludes supplies in the Strategic Petroleum Reserve, left oil inventories 1% above the five-year average.

However, momentum could soon resume, analysts say. Vaccine programs are quickening, providing confidence in economic momentum and travel. Gasoline demand is picking up substantially and was the “bright spot” in the latest WSPR, analysts at ClearView Energy Partners LLC said.

Gasoline consumption averaged 9.1 million b/d, up from 8.9 million b/d a week earlier and the highest total this year. It marked “only the second week above 9.0 million b/d since the onset of the pandemic,” the ClearView analysts said.

Earlier this month, the Organization of the Petroleum Exporting Countries (OPEC) and its allies, aka OPEC-plus, decided to begin boosting output in May. But analysts said that, if vaccine efforts prove successful by summer in the United States and other major economies, demand for fuels derived from oil could outstrip output increases that could still leave supply below pre-pandemic levels at year-end.

OPEC and its partners agreed to add more than 2 million b/d into the market by July. OPEC’s latest projection, however, showed demand rising by 5.95 million b/d this year, a nearly 7% increase from 2020. The International Energy Agency this month raised its forecast for global oil consumption this year by 230,000 b/d to an increase of 5.7 million b/d, citing vaccine momentum in the United States and China.

“With weather getting better in the U.S. and vaccination campaigns accelerating, oil demand is benefiting and the market hopes this will translate into storage draws” moving through the spring, said Rystad Energy analyst Louise Dickson.

EIA said that total petroleum demand over the last four-week period averaged 19.7 million b/d, up 31% from the same period a year earlier. Over the past four weeks, motor gasoline product supplied averaged 8.9 million b/d, up by 62%. Such comparisons have started to reflect not just the recovery this year but also the extreme lows in demand in late March and April of last year, when the pandemic’s shocks arrived.

Brent and West Texas Intermediate (WTI) crude prices dipped lower in intraday trading after the latest EIA report on Wednesday. But both hovered above $60/bbl and remained up more than 20% since the start of the year.

Brent and WTI prices are “near the highest levels since mid-2019,” analysts at Raymond James & Associates said Wednesday.