Cheap and abundant natural gas is the primary driver of coal and nuclear power plant retirements in the United States, but other factors, including stagnant growth in electricity demand, have contributed to the trend, according to a report by the Department of Energy (DOE). 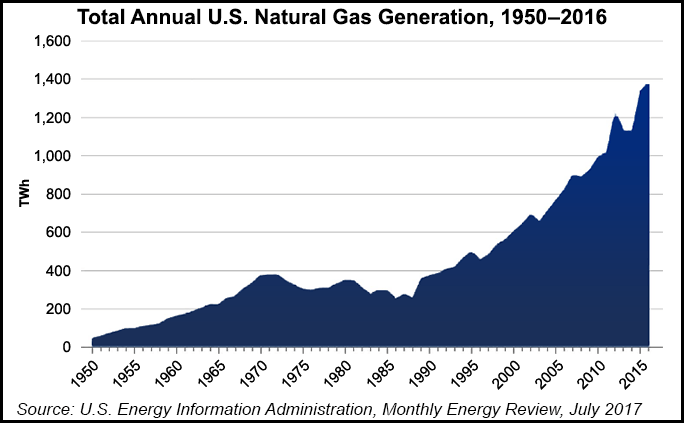 In explaining what forces are responsible for the premature retirement of baseload power plants, the DOE unequivocally stated “the biggest contributor to coal and nuclear plant retirements has been the advantaged economics of natural gas-fired generation.”

The DOE remarked at how the availability of cheap, abundant natural gas, combined with the development of natural gas-fired combined-cycle (NGCC) power plants, created a new baseload competitor to existing coal, nuclear and hydroelectric plants. Those factors helped natural gas dethrone coal to become the largest source of power generation in the U.S. last year.

“The increased use of natural gas in the electric sector has resulted in sustained low wholesale market prices that reduce the profitability of other generation resources important to the grid,” DOE said. “The fact that new, high-efficiency natural gas plants can be built relatively quickly, compared to coal and nuclear power, also helped to grow gas-fired generation.”

“The development of abundant, domestic natural gas made possible by the shale revolution also has produced significant value for consumers and the economy overall.”

But natural gas wasn’t the only contributor to the retirement of coal and nuclear power plants. Low growth in electricity demand, the rise of renewables and government regulation were also factors.

At the same time, renewable sources of energy such as wind and solar power, which DOE coined as variable renewable energy (VRE) resources, have grown quickly since 2007. According to DOE, state renewable portfolio standards contributed to 60% of VRE growth since 2000. Federal tax credits and government research also boosted VREs.

“Because these resources have lower variable operating costs than traditional baseload generators, they are dispatched first and displace baseload resources when they are available,” DOE said.

Government regulation — especially the 2015 deadline for coal- and oil-fired power plants to comply with the Mercury and Air Toxics Standards — forced many plants into early retirement. DOE said the controversial Clean Power Plan, if fully implemented, would place additional pressure on coal-fired generation.

At the conclusion of explaining why coal and nuclear plants were being retired, the DOE stated that the “continued closure of traditional baseload power plants calls for a comprehensive strategy for long-term reliability and resilience.” To that end, DOE staff issued a list of policy recommendations — some of which fall within DOE’s authority, but other government agencies such as FERC and the Nuclear Regulatory Commission would also be affected, as would some private organizations.

Among its recommendations, DOE staff suggested that the Federal Energy Regulatory Commission expedite its efforts with states, regional transmission organizations, independent system operators and other stakeholders “to improve energy price formation in centrally-organized wholesale electricity markets.” DOE and other federal agencies should also “accelerate and reduce costs” for permits related to grid infrastructure.

As for natural gas, the last recommendation was for DOE, FERC, utilities and states to support increased coordination between electric utilities and the natural gas industry “to address potential reliability and resilience concerns associated with organizational and infrastructure differences.

Although DOE acknowledged that significant progress has been made in understanding how to keep the nation’s electricity grid reliable under changing market conditions, more work is needed to understand how to keep the system reliable into the future.

“Low natural gas prices are driving greater use of natural gas for electricity generation, which has made exposure to natural gas price risk related to availability a growing concern in several regions,” DOE said. “There are tradeoffs between multiple desirable attributes of the grid.

“For example, within power systems, it may be the case that a more reliable and resilient system is more costly than the least-cost system that a centrally-organized wholesale market is intended to deliver. Similarly, policies that seek to deliver more jobs, reduce pollution, or reduce risk may require more upfront investment at an initially higher cost to society as a whole than a least-cost system.

The release of the report satisfies a memorandum issued by DOE Secretary Rick Perry in April, which requested a study to examine electricity markets and reliability.

In a statement, Don Santa, CEO of the Interstate Natural Gas Association of America, commended the DOE for recognizing the importance of natural gas for power generation and urged Congress and regulators to help facilitate the construction of additional pipeline capacity.

“The recognition in the DOE staff report of the importance of ‘low-cost, abundant natural gas’ and ‘highly efficient’ NGCC generating plants to the nation’s electric grid highlights the need for a policy framework that promotes sufficient and timely pipeline capacity to meet the needs of the electricity generation,” Santa said in a statement Thursday. “These findings provide additional impetus for lawmakers, regulators and policymakers to pursue initiatives that will improve the efficiency of the pipeline permitting process.

“We also hope that the report will spur interest in finding solutions to ensure that electric generators in all markets are rewarded for holding the firm pipeline contracts necessary for a reliable electricity market.”

PJM Interconnection said it also agreed with the DOE’s assessment, and said any solutions should be cost-effective and take into account the costs to consumers.

“The report acknowledges that wholesale power markets are working and providing reliability at the lowest possible cost and that power supply resources are more diverse than they have ever been,” PJM said in a separate statement Thursday. “It also highlights the importance of expediently addressing needed reforms in energy price formation followed by a focus on grid resilience. These issues are a top priority.”