Diversified Gas & Oil plc, which has faced scrutiny in the Appalachian Basin over well plugging liabilities, has cut a long-term deal with regulators in Kentucky to further address asset retirement obligations. 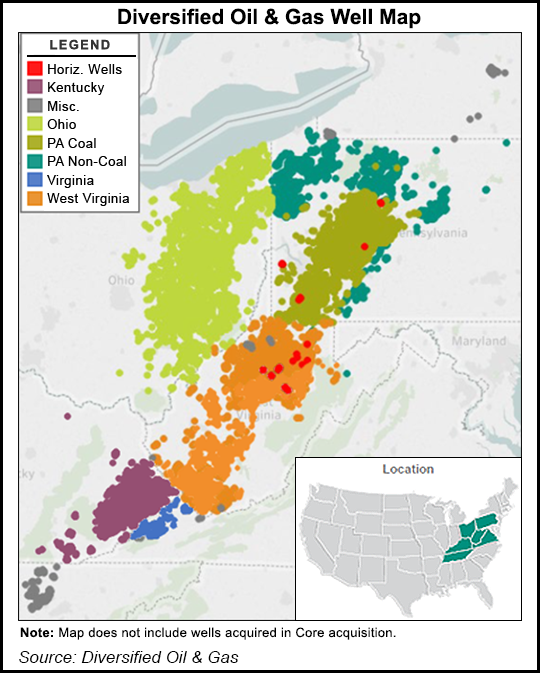 Under the new five-year agreement, the Alabama-based company will post a $1.5 million bond to cover its asset base in the state and plug 25 inactive oil and gas wells this year and at least 20 annually from 2020-2023.

“This is another positive agreement that underlines our commitment to responsibly managing the wells within the states in which we operate,” said CEO Rusty Hutson. “The agreement provides clear visibility for both the commonwealth of Kentucky and the company on asset retirement activities across our operated wells” in the state.

Since it went public two years ago on the London Stock Exchange’s AIM market for emerging companies, Diversified has spent roughly $1 billion amassing a massive asset base of 60,000 mostly conventional wells across millions of acres in Kentucky, Ohio, Pennsylvania, Tennessee, Virginia and West Virginia. It has 7,500 wells in Kentucky.

Its agreement with regulators also requires an assessment of wells across the state by June 30. From 2020 to 2023, Diversified said t it would plug or return to production at least 50 wells annually.

Stakeholders have raised concerns about the liabilities Diversified has taken on and even challenged the transfer of certain wells acquired to the company’s bonds. Diversified has responded with long-term agreements worked out with state regulators in Ohio and most recently in West Virginia, where it cut a 15-year deal and posted a $3 million bond for the duration of that agreement.

“We continue to move toward our objective of having the wells in our main states of operation covered by long-term agreements with the state regulators,” Hutson said.

The average well depth of Diversified’s portfolio is 4,200 feet and consists of 99% conventional assets. The company has consistently said that it budgets annually to cover its asset retirement obligations. Last year, the company plugged 41 wells across the basin at an average cost of $23,800 each, according to an update issued in December when the agreement with West Virginia was announced.

While the company has drilled wells and said it remains interested in doing so, it’s primarily focused on operating its existing asset base, generating free cash flow from producing wells and keeping its overhead costs down to generate stable returns.

Its latest agreement with Kentucky surpasses current bonding requirements. Operators in the state must post anywhere from $5,000 for a single well up to $320,000 for a blanket bond, depending on the depth, number and type of wells drilled. Diversified also noted that if it returns more than the required number of wells to production in any calendar year, it may carry the activity forward into other periods covered by the deal.

Hundreds of thousands of wells in Appalachia are thought to be abandoned or orphaned, stoking the concern of operators, regulators and landowners that have stepped-up efforts to better resolve the problem with additional funding and legislation.

Diversified noted that it’s also working on a similar long-term agreement with Pennsylvania. Its plans in Ohio, West Virginia and Kentucky cover 60% of the operated wells.