Diversified Gas & Oil plc said this week that it has extended its asset retirement agreement with Ohio regulators and agreed to plug more wells each year. 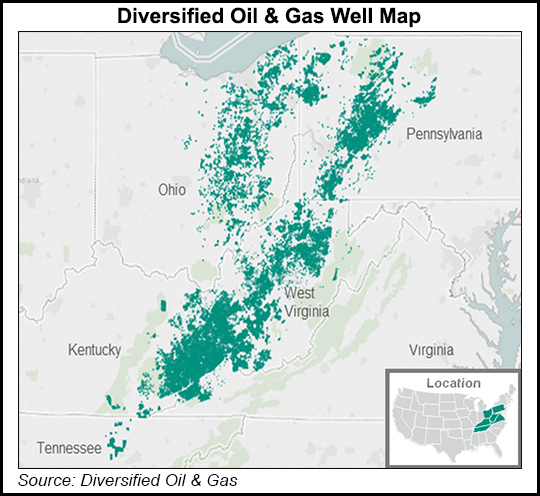 The company is the Appalachian Basin’s largest operator of conventional wells, with 60,000 between its northern and southern divisions spread across six states. Diversified produced 84,800 boe/d last year, of which 70,000 boe/d was produced by legacy assets. Its well retirement obligations in Ohio have been extended through Dec. 31, 2029, under the latest agreement.

The terms remain largely unchanged, but Diversified has agreed to plug 20 wells/year for the duration of its pact with the state, a slight increase from the 18 it was required to retire annually under the previous agreement. Diversified also is to post a surety bond of $650,000 in the state.

The company operates 7,100 wells in Ohio and plugged the required 18 wells in the state last year.

There are thought to be hundreds of thousands of abandoned and orphaned wells across the basin, many of which were drilled in the early- or mid-20th century when regulations and records to keep their numbers in check didn’t exist. As Diversified has pursued various acquisitions in recent years and expanded its portfolio, concerns have been raised about its commitment to retiring some of those assets.

As a result, it has an ongoing asset retirement program and has finalized similar well plugging agreements with Kentucky, Pennsylvania and West Virginia for durations of 10 years or more and posted more than $13 million in total bonds. The company also has assets in Tennessee and Virginia, but 98% of its operations are focused in the other states.

“This agreement, particularly in tandem with our existing agreements with the other states in which we operate, further strengthens our asset retirement program, and provides clear visibility into the cash flows and operational responsibility required to deliver on our commitment to retire wells,” CEO Rusty Hutson said of the Ohio extension.