County road workers punctured a 12-inch diameter Pacific Gas and Electric Co. (PG&E) transmission pipeline last Friday, injuring up to 14 people and closing north-south state Highway 99 in California’s Central Valley near Fresno. The incident was caused by an excavator and was not the fault of the company, according to officials. 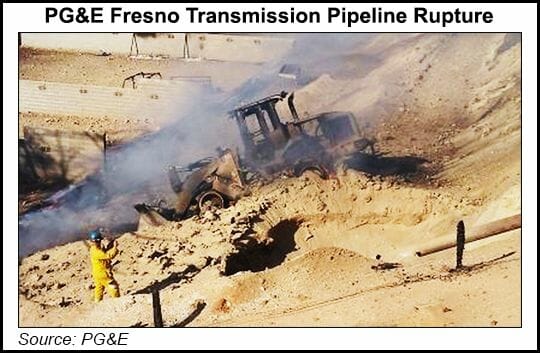 A fireball erupted and flared for nearly an hour before PG&E field crews shut off the flow of gas about 3:20 p.m. PDT on Friday.

State and utility investigators were at the scene over the weekend. Final repairs could take up to two weeks, according to a PG&E spokesperson. Two of the early emergency responders were among the people treated for burns and injuries.

PG&E said the transmission pipeline had been surveyed in 2013, and there was about 40 inches of cover between the pipe and the surface. The distance of more than three feet meets current federal and utility standards.

The blast occurred near a Fresno County Sheriff’s gun range when a county worker leading a team of inmates constructing a dirt road struck the PG&E high-pressure transmission pipeline. The county worker and at least one of the inmates were seriously burned when the resulting explosion sent a fireball 100 feet into the air, according to reports. Fire officials evacuated nearby residents and closed the nearby state highway in both directions for several hours Friday afternoon.

During the weekend, PG&E coordinated with the California Public Utilities Commission (CPUC) investigators to remove and begin repairing the damaged pipe, which required the CPUC’s approval.

PG&E’s spokesperson said customers in the area did not lose natural gas service nor were any service interruptions expected.

“Our primary concern is always the safety of the public and our employees. Our thoughts and prayers continue to be with those individuals who were injured, and as we continue to investigate the incident, we remind all of our customers of the importance of calling 811 before they do any type of digging projects. Friday’s incident is a sobering reminder that digging into gas pipelines can have serious safety consequences.”

On Monday, CPUC officials said a probe they launched last Friday is “continuing and will determine the cause of the explosion and whether there were any violations of state or federal law by PG&E.”

The regulatory commission’s notice acknowledged that from the initial reports it appears that there was “a Fresno County employee performing work in the vicinity of a pipeline and that there was no active 811 call-before-you-dig ticket, and the CPUC’s investigation will determine whether this was the primary cause of the explosion.”

Verifying whether there was the advance 811 telephone call and the physical cause of the rupture and explosion will “take some time to complete,” a CPUC spokesperson said. “The CPUC will work as expeditiously as possible with assistance from the federal Pipeline and Hazardous Materials Safety Administration [PHMSA].”

Part of the probe will look at the accuracy of PG&E’s pipeline utility maps and records, an area in which the combination utility has been found in the past to have been in violation of state and federal requirements (see Daily GPI, April 3, 2012), along with assessing the utility’s emergency response performance and other factors contributing to the incident.

On Monday, the CPUC Safety and Enforcement Division staff was still monitoring PG&E repair work at the scene and had not authorized the pipeline to be brought back into service, the CPUC spokesperson said.

The latest break in PG&E’s transmission system comes within days of the San Francisco-based combination utility being assessed one of the largest fines ever, a $1.6 billion penalty for violations before, during and after the fatal September 2010 transmission pipeline rupture and explosion in the Bay Area suburb of San Bruno (see Daily GPI, April 9). It also comes at a time when the state’s chief regulator has called for an investigation of whether PG&E has established the proper safety culture and safeguards throughout its large organization.