Permian Basin pure-play Diamondback Energy Inc.’s oil production is almost back to levels before Texas was stopped in its tracks by last week’s wintry blast, but it will take some time to make up the difference, CEO Travis Stice said Tuesday. 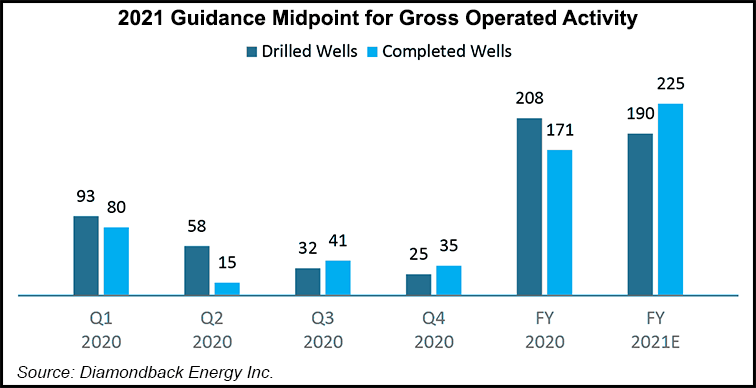 Speaking during the fourth quarter conference call, Stice told analysts that Permian oil output “has nearly returned to pre-storm levels…We expect to make up the majority of the lost production throughout the year, but will not be able to make it all up in the first quarter.”

However, the guidance “also accounts for the estimated impact of the severe winter storms in the Permian Basin last week, which we estimate to have knocked out the equivalent of 100% of our production for four to five days,” the CEO said.

The nearly one-week knockout marred what had been a strong end to 2020. However, even with the loss of output last week and falling operating costs, the management team sees no need to ramp up more output.

“Well costs and cash operating costs remain near all-time lows, and our average completed lateral length in the fourth quarter was over 13,000 lateral feet, a company record,” Stice said, adding that, “we are still operating in a market supported by supply that’s been purposely withheld to allow global inventories to decline as demand recovers from the depths of the global pandemic.

“Diamondback continues to see no need to grow oil production into this artificially undersupplied market and instead plans to hold fourth quarter 2020 production flat while generating free cash flow used to pay a dividend and pay down debt.”

The fourth quarter had built on the momentum begun in 3Q2020, with free cash flow increasing to more than $242 million, up 58% sequentially.

The company now expects to generate “nearly $1 billion of free cash flow at $50/bbl oil,” Stice said. That would be pro forma once the merger with fellow Permian operator QEP Resources Inc. is completed, which is now set for March.

A new “Net Zero Now” initiative also has been launched among the ESG initiatives that aims for every hydrocarbon molecule developed to be produced with zero net Scope 1 emissions.

“Diamondback expects to continue to reduce flaring, which is now down almost 90% from 2019 levels directly impacting over 50% of our 2019 scope on emissions,” Stice said.

“These two changes will be significant drivers and reduce our carbon footprint. But other initiatives like methane leak detection and full field electrification will also have a direct impact on our emissions reduction strategy.”

Because Diamondback would “still have a carbon footprint,” it plans to purchase carbon offset credits. In addition, Diamondback or a subsidiary eventually would “invest in income-generating projects to more directly offset the remaining Scope 1 emissions.

“Gas operators have traditionally operated with a low-carbon footprint, and we believe it is time for oil-focused operators to follow the example they have set, albeit with different emissions limitations inherent in oil production,” Stice said.

“The energy transition is here and oil and gas are commodities that will play a vital role in fueling this transition and global growth for decades, regardless of public policy or perception. But our industry must acknowledge this reality, and change behaviors in order to succeed in this new energy economy.”

Diamondback also has changed its compensation program in response to shareholder requests. The CEO’s long-term incentive (LTI) compensation target amount has been reduced by 20% from 2020, while the remaining executive team’s LTI has been cut by 10%.