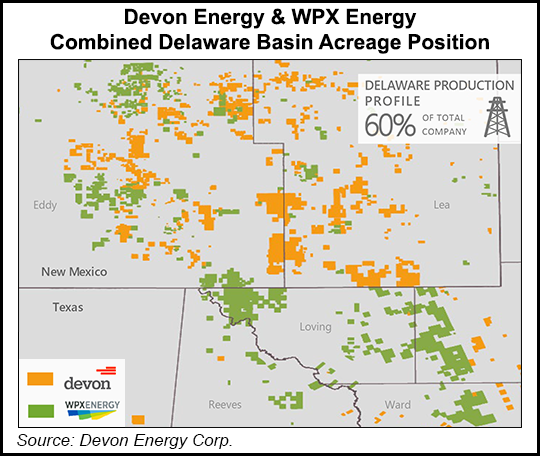 The Oklahoma City independent in its third quarter results showcased how it’s managed to not only hold things together but improve since the sharp industry downturn in the second quarter.

For the second consecutive quarter, Devon increased its full-year 2020 oil production forecast to 152,000-154,000 b/d on better-than-expected well productivity and strong base production performance.

“Our teams are responding to a challenging operating environment by delivering results that continue to exceed production and capital efficiency targets, while successfully driving down per-unit operating costs and maximizing margins,” Hager told investors. “This is

evidenced by several noteworthy accomplishments in the quarter, including oil production

that exceeded midpoint guidance by 6,000 b/d, complemented with capital

spending that was once again below forecast.”

Devon also is expanding its margins “through improvements in our cost structure, headlined by operating expenses 8% below guidance,” while general/administrative costs fell 30% year/year.

The quarterly performance “was highlighted by record-setting well productivity and capital efficiency gains” in the Permian’s Delaware sub-basin, which “drove oil production well above guidance with a total capital investment that was below forecast.”

For the final three months of the year, oil production is forecast to average 148,000-153,000 b/d, up 7,000 from previous guidance. Devon plans to deliver the improved output using less capital, with the top end of full-year exploration and production capital spending cut by $10 million to $950-990 million. Upstream capital is expected to be $160-200 million.

While it was improving efficiencies in the Permian Delaware, Devon in late September snapped up basin rival WPX Energy Inc. in an all-stock merger. The transaction, expected to close early next year, would give Devon shareholders 57% of the combined company, with WPX holding the remaining 43% stake.

On average, Devon operated nine drilling rigs and three completion crews, all in the Delaware, where production overall averaged 155,000 boe/d, up 22% year/year.

The three-mile Cobra lateral development in Lea County, NM, the heart of the Delaware development, consists of the “longest wells ever drilled in the basin,” according to Hager. The company set a record for Wolfcamp productivity, with 30-day initial production rates averaging 7,300 boe/d per well.

Eagle Ford Shale output was off 11% from the first half of 2020 to average 46,000 boe/d. With development down, Devon and its partner put the brakes on drilling and completion activity. The partnership has 22 high-impact uncompleted wells in its inventory and expects to resume capital activity early next year.

Within the Anadarko Basin, output averaged 89,000 boe/d net, essentially flat. No rigs were running in 3Q2020 and there were no well completions.

However, the Anadarko is getting a second look because of the “recent improvement in natural gas prices,” Hager said. Devon may resume activity in the Oklahoma basin next year through its $100 million drilling carry with Dow Inc.

Anadarko gas production in 3Q2020 averaged 242 MMcf/d, higher than any other Devon operating area. The Delaware produced the second most gas during the period at 239 MMcf/d.

The outperformance in production, coupled with improvements in corporate costs, positioned Devon to generate $223 million of free cash flow in 3Q2020. Upstream capital spending was $195 million, 3% below midpoint guidance, while production costs were $271 million, an 8% improvement from a year ago

Devon exited the quarter with $1.9 billion cash and an undrawn credit facility of $3 billion; outstanding debt was $4.3 billion with no debt maturities until late 2025.

To improve the bottom line, Devon in early October completed the sale of its gassy Barnett Shale assets to Thailand’s Banpu Kalnin Ventures. Devon received a cash payment of $320 million at closing after adjusting for a $170 million down payment received in April.

Devon has an opportunity for contingent cash payments from the Barnett assets of up to $260 million based upon future commodity prices, “with upside participation beginning at either a $2.75/Mcf Henry Hub natural gas price or a $50/bbl West Texas Intermediate oil price,” Hager said.