Devon Energy Corp. on Wednesday renewed its onshore North American exploration portfolio, dancing away from the one that brought it to the dance — unconventional natural gas — to marry crude oil, a big reason it agreed to spend $6 billion for oily land in the Eagle Ford Shale. 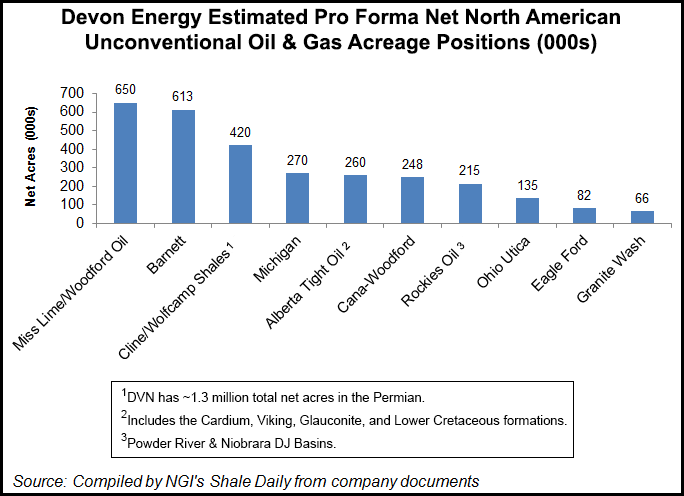 The South Texas transaction, scheduled to be concluded by the end of March, would hand Devon the principal subsidiary of GeoSouthern Energy Corp., a pioneering Eagle Ford producer based in The Woodlands, TX.

The transaction is but one piece to create “a new Devon,” said CEO John Richels. During an hour-long conference call, he and his management team discussed the strategy, in which Devon would monetize conventional oil and natural gas assets in Canada and the United States, and other noncore properties.

In addition to the Eagle Ford, Devon’s primary focus going forward will be to extract oil-weighted production from the Permian Basin, the Barnett Shale and the Anadarko Basin’s Cana-Woodford formation. It also plans to keep its estimable heavy oil crude production ongoing in Canada.

The makeover eschews natural gas in favor of crude oil — light and heavy. GeoSouthern’s 82,000 net acres in DeWitt and Lavaca counties produce an estimated 53,000 boe/d, and it’s also providing Devon with about 1,200 undrilled locations. The risked resource potential is estimated at 400 million boe, most of which is proved reserves.

Devon would continue to manage production, and with BHP, determine how many wells to drill. For now, the rig count is to remain at about 18 and be in “full development mode,” said COO Dave Hager. Average estimated ultimate recoveries in DeWitt County have exceeded 800,000 boe per well.

Most of the acquired acreage in DeWitt County is derisked, with at least one producing well in each drilling unit. By entering the play in full development mode, Devon plans to expand production in the near term while generating free cash flow.

Privately-held GeoSouthern since 2011 has increased the DeWitt County rig count to 18 from five. That’s about the pace Devon expects to keep into 2014.

“With this transaction, we have secured a premier acreage position in the very best part of the world-class Eagle Ford oil play,” said Richels. “This acquisition enhances our already strong North American portfolio by adding another low-risk, light oil asset that provides outstanding well economics and self-funded growth.”

Those who have followed the trajectory of U.S. unconventional oil and gas history know it was Devon that helped build North America’s natural gas reserves. In 2002 Devon purchased George Mitchell’s Mitchell Energy & Development Corp. — and its shale technology — opening up a treasure trove of unconventional gas in the granddaddy Barnett Shale. Interestingly, the GeoSouthern transaction comes at a cost that’s almost twice the $3.1 billion Devon paid for the Barnett portfolio (see Daily GPI, Nov. 19, 2002).

Devon’s asset sales are to begin in 2014, and although few details were mentioned, the properties up for sale hold about 30% of the operator’s natural gas reserves, 12% of the natural gas liquids and 8% of the oil. All of the Canada conventional gas is to be sold.

“We have considered many acquisition opportunities over the past few years, but none have met our stringent criteria,” said Richels. “Our patience and disciplined approach have culminated in this outstanding opportunity, allowing us to secure these world-class light oil assets” at an estimated 2.5 times expected 2015 gross earnings.

“Companies with concentrated asset positions in the best oil plays in the country, such as the Eagle Ford, Bakken and Permian Basin, are trading at substantially higher multiples,” said the CEO.

“The acquired assets are expected to grow at a compound annual growth rate of 25% over the next several years, reaching a peak production rate of approximately 140,000 boe/d,” Hager told analysts. The development drilling program already is self-funding and should generate an estimated annual cash flow of $800 million beginning in 2015.

“The addition of these assets leverages our core competencies,” said Hager. “The technical expertise and project management experience developed in our other large-scale, unconventional development plays provide us the skillset to efficiently develop these assets and optimize the value through improved recoveries and reduced costs.”

The purchase would be funded with cash on hand and debt, repaid with free cash flow and by selling assets. The transaction is expected to be accretive at the close “to virtually every metric, including cash flow per debt-adjusted share,” said Richels.

The Blackstone Group LP, GeoSouthern’s private equity partner, is expected to take a $1.54 billion payday on the sale. Blackstone also indicated it would exit GeoSouthern funding once the Eagle Ford sale is complete.

“GeoSouthern was one of the pioneers of the Eagle Ford, having identified DeWitt County early on as one of the most attractive areas of the play,” said Blackstone Energy Partners Managing Director Angelo Acconcia. “The company has done a world-class job of not only putting together a significant, core acreage position, but of accelerating the drilling, development and production of this strategic position and has realized some of the most attractive well results across the Eagle Ford.”

Although it’s selling its principal subsidiary, GeoSouthern will continue to explore and develop onshore properties. It owns and operates about 68,000 net acres in the Austin Chalk formation and Brookshire Dome Field in Texas.