The deal is part of the Devon’s ongoing plan to complete $1 billion in divestitures by next year, while Penn Virginia said the acquired acreage carries “significant upside potential” in the Eagle Ford and Austin Chalk formations of Texas, allowing it to increase production by about 30%.

Houston-based Penn Virginia said the transaction would add roughly 19,600 net acres contiguous to its core operations and boost its net production by about 3,000 boe/d (64% weighted to oil).

The Oklahoma City-based Devon said the Lavaca County sale, along with other minor asset sales across its U.S. operations, will generate a combined $340 million in proceeds, bringing the company closer to completing the $1 billion divestiture program it outlined during a conference call with analysts in May.

Devon has been looking to cash in noncore acreage as it pursues oilier opportunities in the Permian Basin and in Oklahoma’s STACK (aka, the Sooner Trend of the Anadarko Basin, mostly in Canadian and Kingfisher counties). Devon recently touted a record 6,000 boe/d well in the STACK’s Meramec formation.

“These highly accretive asset sales are an important step in executing on our $1 billion divestiture program over the next year,” CEO Dave Hager said. “The divestiture proceeds will further strengthen our investment-grade financial position and provide us additional flexibility to build operational momentum across our top-tier U.S. resource plays.”

Penn Virginia COO John Brooks said, “This strategic acquisition is an excellent fit and an important step in our long-term growth strategy for Penn Virginia. It is particularly attractive as it materially increases our Eagle Ford production, acreage and drilling. The transaction is also accretive to all key per-share metrics including earnings, cash flow and net asset value.

“Our operations team knows this area extremely well, as the Devon acreage is contiguous to our existing acreage position. We will utilize our technical capabilities to optimize production and reduce operating and administrative costs per boe on the acquired assets, while significantly increasing the size and scale of our company,” Brooks added.

“…We are acquiring high quality properties at an attractive price that will provide Penn Virginia many years of drilling inventory with enhanced economics even in today’s commodity price environment.”

Devon said the Lavaca County acreage produced a net aggregate 4,000 boe/d, 60% weighted to oil, and held less than 10 million boe in proved reserves as of Dec. 31.

The transaction, subject to conditions, is expected to close by the end of the year. RBC Richardson Barr acted as financial adviser.

Devon said it is progressing in talks to sell its acreage in the Barnett Shale in Johnson County, TX. The acreage in North Texas represents roughly 20% of Devon’s net production in the Barnett, management said.

“Devon is actively marketing these assets and expects to complete its noncore divestiture program over the next year,” management said. 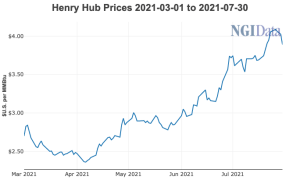