With a spacing test in southeastern New Mexico further delineating the stacked-play potential of its acreage, Devon Energy Corp. said it could ramp up to 10 rigs in the Permian Basin’s Delaware sub-basin by year-end 2017. 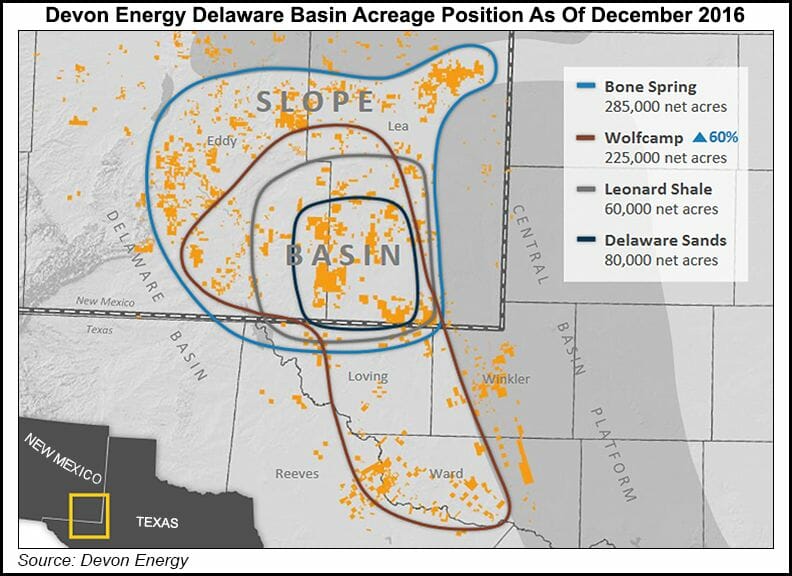 Devon said it has 60,000 net surface acres prospective for the Leonard Shale and estimates that the play could contain more than 1 billion boe in recoverable resources.

“The strong flow rates from the Thistle spacing pilot is another example of the positive rate of change we are achieving in the Delaware Basin and is another critical step in further delineating the massive resource upside associated with our North American onshore portfolio,” COO Tony Vaughn said. “In the upcoming year, we plan to continue to accelerate drilling in” the Delaware sub-basin and in the Oklahoma STACK (the Sooner Trend of the Anadarko Basin, mostly in Canadian and Kingfisher counties.“We expect this increased activity to deliver strong growth in high-margin production and further expand our recoverable resource in the U.S.”

Management said Devon is preparing to ramp up to three operated rigs in the Delaware by the end of the year, with the potential to reach 10 rigs by year-end 2017 depending on cash flow. Between the Delaware Sands, the Leonard Shale, the Bone Spring and the Wolfcamp formations, Devon said its stacked-play potential in the Delaware gives it exposure to a total 670,000 net acres by formation, with close to 6,000 risked undrilled locations.

Last week’s agreement by the Organization of the Petroleum Exporting Countries to curtail production for the first time in eight years has brought more bullish sentiment to the U.S. onshore, with independents like Devon among those whose stock prices jumped on the news.

The Permian is poised to the lead the way among U.S. oil plays under improved commodity pricing, with producers grabbing up acreage in the basin this year to take advantage of its best-in-class economics.