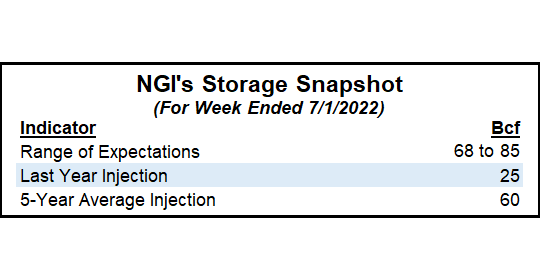 While national demand is expected to ease to near normal July 15-17, NatGasWeather said the next several days remain on track to deliver continued intense heat across a majority of the Lower 48, with highs of upper 80s to 100s.

At the same time, production estimates on Wednesday showed “a significant decline” from the previous day, according to Wood Mackenzie analyst Laura Munder. She estimated output fell 1.8 Bcf to 94.2 Bcf, with declines “concentrated in areas” where there are maintenance or operational issues. This includes work affecting the Northeast, Appalachia, the Gulf South and the New Mexico portion of the Permian Basin.

But it was not enough to offset analysts’ expectations for a robust storage increase relative to the five-year average.

Ahead of the report, median estimates of major surveys landed in the mid-70s Bcf. Those compare with a five-year average injection of 60 Bcf.

Reuters’ survey produced injection estimates that spanned 68 Bcf to 84 Bcf, with a median of 75 Bcf.

Results of Bloomberg’s poll showed a median injection estimate of 75 Bcf. Predictions stretched from 70 Bcf at the low end to 85 Bcf at the high mark.

A Wall Street Journal poll found an average injection expectation of 76 Bcf, with a range of 70 Bcf to 84 Bcf.

EIA last week reported a larger-than-expected 82 Bcf injection into storage. Total working gas in storage as of June 24 was 2,251 Bcf — 322 Bcf below the five-year average, according to EIA.

In the aftermath of the Freeport LNG outage, caused by an explosion and fire in June, U.S. export capacity was cut by about 2.0 Bcf/d through at least the end of summer and perhaps much longer. That gas is now available for domestic consumption, including storage, and this has helped bolster injections in recent weeks.

While global demand for U.S. LNG remains bullish, the Freeport matter remains a drag on American exporters’ ability to meet it.

This has helped to keep Nymex prices in check so far in July.

In Europe, however, prices continue to surge.

Norway’s government early this week intervened to resolve a union strike that “would have caused widespread disruption to several gas fields and pipelines, leading to a 56% drop in Norwegian gas exports” – mostly to neighboring countries — if it was not averted, said Rystad Energy analyst Lu Ming Pang.

“The loss of gas supply from Norwegian fields would have been a triple whammy for Europe, within just weeks of losing Russian flows and supplies from Freeport LNG in the U.S.,” Pang said.

A prolonged strike would have come on top of lost European access to Russian natural gas amid repair work delays on the Nord Stream 1 (NS1) pipeline and the Kremlin’s war in Ukraine.

Still, the benchmark price in Europe rallied to a four-month high on Wednesday. Traders on the continent continued to fixate on the potential for Russian supplies to dwindle further – before countries there can secure adequate supplies from other sources ahead of next winter.

NS1 is scheduled to undergo annual maintenance from July 11 to July 21, “with many market participants monitoring the restart and their beleaguered gas supplies with great interest,” Pang said.

Such interest heightened after the International Energy Agency (IEA), citing the concerns of government officials in Europe, this week cautioned that Russia may not resume flows to the continent after the NS1 maintenance work culminates.

The international watchdog cited Russia’s “unpredictable behavior” in the months since the Ukraine conflict commenced in February. IEA said it appeared possible the Kremlin would cut off gas via NS1 in retaliation of Western sanctions imposed against Russia because of the war.

“A complete cut of Russian pipeline supplies to the European Union cannot be excluded,” IEA said.

Next-day cash prices crept lower Wednesday, dragged down by declines in the volatile Northeast. After rallying a day earlier, hubs in the region gave back chunks of their gains.

Despite the day’s losses, forecasts show overall conditions ripe for robust demand in the days ahead.

NatGasWeather said that, through the coming weekend and the start of next week, “nice to warm conditions will rule most of the northern third of the U.S. as weak weather systems bring showers and comfortable highs of 60s to 80s.”

However, the southern two-thirds of the Lower 48 “will be very warm to hot as high pressure rules with highs of upper 80s to 100s,” the firm said. The most intense heat will stretch across the Southwest deserts, Texas and the southern Plains, it added.

Looking to the middle of next week, NatGasWeather said hot upper high pressure will dominate the western, central and southern United States, with continued highs of upper 80s to low 100s for “strong national demand.”

There will, however, be regional pockets of modest demand. The Great Lakes, Ohio Valley, and Northeast “will be comfortable as weak weather systems track through” and usher in highs of upper 60s to 80s, the forecaster said.