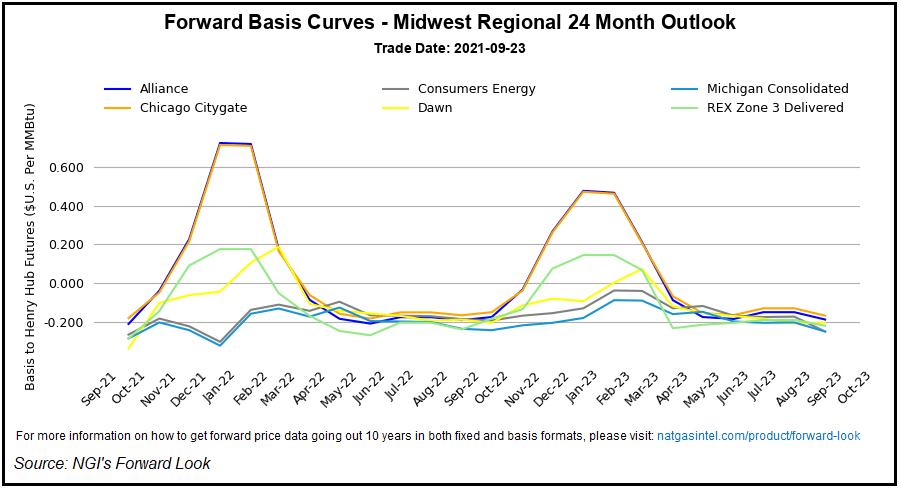 EBW Analytics Group noted that buying ahead of prompt month expiry is common, and this likely helped foster futures momentum.

“In the immediate term,” the EBW team said, “positioning ahead of October options expiration on Monday and final settlement on Tuesday” will influence markets. “Traders may increasingly opt to trim short exposure” and “allow the October contract to extend the move higher.”

Motivators for bulls abound, though, with modest production ahead of winter in the United States, as well as the potential for precariously low storage levels in Europe and parts of Asia. With challenges abroad, U.S. liquefied natural gas (LNG) exports to fuel foreign energy needs have soaked up more supply this year than in the past, adding to imbalance worries.

While demand has surged in recent months – driven by scorching heat and increased economic activity over the summer – production has not kept pace. Pandemic uncertainties pushed producers to the sidelines, and they have only gradually increased output this year. Production has held in the low 90s Bcf/d most of this year, well below the 96 Bcf/d high point prior to the coronavirus’ arrival.

That resulted in light storage increases in the United States over most of the summer, leaving supplies for winter below normal and raising concerns. Recent injections have helped ease worries, but should the coming winter prove exceptionally cold – and long – problems could bubble up. This possibility has undergirded recent rallies, including one earlier in September that sent futures above $5.400.

For the week ended Sept. 17, the U.S. Energy Information Administration (EIA) on Thursday said utilities injected 76 Bcf natural gas into storage. That increased inventories to 3,082 Bcf. However, it left stocks well below the year-earlier level of 3,671 Bcf and the five-year average of 3,311 Bcf.

Analysts at The Schork Report said that, while production is likely to rise through the fall months, it has trailed demand and storage is bound to remain low relative to past years. They predicted that inventories at the end of injection season – usually late October — will be 9.7% below last winter’s starting balance.

At the same time, inventories abroad are trending even lighter, particularly in Europe. ClearView Energy Partners LLC said European gas storage levels are currently around 73% of capacity; that is 13 percentage points below the 2015-2019 average for the same time of year.

All of that noted, weather-driven demand has begun to ease notably in the United States alongside autumn weather. Relatively warm conditions at this time of year tend to translate into mild temperatures and decreased national demand.

Bespoke Weather Services said it expects above average temperatures through the final week of September and early October.

“We do expect the warmth to continue even beyond day 15, owing to the La Niña base state, keeping demand quite low,” Bespoke said Friday. “This makes us feel that risk is growing for potentially a sizable pullback in prices once we clear the fog of contract expiration.”

Spot gas prices slipped lower for the fourth time in a week, with fall weather settling in and cooling demand fading.

Rain infiltrated the Northeast Friday and cool air swept through with highs of upper 50s to 70s. A “reinforcing cool shot” was expected in the region over the weekend, NatGasWeather said, minimizing demand.

Highs were also moderate through most of the Midwest, resulting in double-digit price declines across the region. Emerson dropped 44.5 cents to $3.970, while Joliet shed 16.0 cents to $4.455.

Summer-like highs continued to bake swaths of Texas, the Southwest and Southern California on Friday, though temperatures were expected to fall some over the weekend and along with scattered showers, NatGasWeather said.

“National demand will remain light” in the week ahead, “as highs of 60s to 80s rule most of the U.S.,” the firm said. For the first week of October, most of the Lower 48 will experience above normal temperatures, “which for early fall means perfect highs of 70s to 80s across the northern U.S., besides the slightly cooler Northwest and Northeast corners.”

In California, where prices were volatile but lofty most of the summer, SoCal Citygate declined 16.0 cents on Friday to $6.045.

On the Atlantic storm front, meanwhile, Hurricane Sam developed over open waters on Friday after becoming the season’s 18th named storm, AccuWeather said. The firm’s forecasters cautioned that Sam could develop into a major hurricane prior to approaching the northern Caribbean early in the coming week.

Sam was located roughly 1,400 miles east-southeast of the Leeward Islands, packing winds of 75 mph, and it was expected to take a west to west-northwest path across the central Atlantic through the weekend, according to AccuWeather. While its ultimate destination was not clear, the East Coast of the United States and Canada could be impacted, the firm said.