Natural gas forward prices picked up a few cents on average between June 10 and 16 despite what some market insiders pegged as a bearish storage report, according to NGI Forward Look. 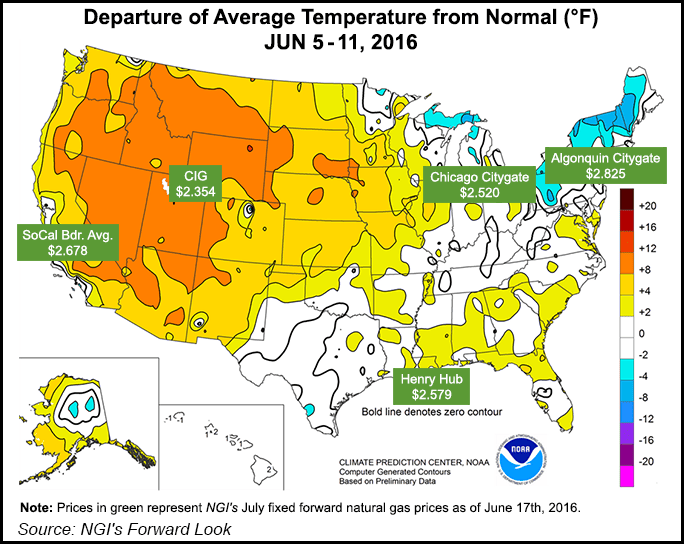 The U.S. Energy Information Administration reported a 69 Bcf injection to storage inventories for the week ending June 10, which was above the market consensus of 65 Bcf. The build moved storage levels to 3,041 Bcf, which makes the 2016 refill season the earliest to reach 3 Tcf in the 23 years that records are kept.

The Nymex July contract settled 1.5 cents lower on the day, but that decrease was likely related to profit-taking rather than the “bearish” storage report.

Regardless, the July contract still rose 2.2 cents between June 10 and 16, while August and the balance of summer (August-October) package were essentially flat.

Some weakness was seen further out the curve, however, as the prompt winter dropped 8 cents and the winter 2017-2018 strip fell 6 cents.

“This entire week, weather has been relatively neutral, with no large run-to-run differences, and the result is prices stuck in this very narrow range,” said Jacob Meisel, chief meteorologist and co-founder of Bespoke Weather Services.

The small swings appeared to continue Friday as the July contract was trading pennies higher at midday.

“The summer heat didn’t bother waiting for July and has been hanging around since early June. Most of the country was 4 to 8 degrees above normal last week,” said NGI Markets Analyst Nate Harrison of the recent strength in July prices.

Indeed, national power burn this month-to-date has been averaging 30.5 Bcf/d, nearly 2 Bcf/d higher than last June month to date, according to Genscape.

Genscape’s supply-demand forecast shows gas demand for power burn running in excess of 33 Bcf/d through June 21, then remaining well above 32 Bcf/d through the rest of the week.

“This should sustain the run of strong power burn numbers so far this month and summer,” Genscape said.

And while this week’s storage report was bearish compared with market expectations, the 69 Bcf build was well below last year’s 96 Bcf build and the five-year average of 87 Bcf, Harrison said.

In the near term, it appears guidance turned more bearish overnight, according to Bespoke, with models showing bearish risk across the South, Southeast and Mid-Atlantic, where more trough action is seen preventing any southerly flow that could elevate temperatures significantly above average.

“Similarly, no models show a significant threat of ridging across the East Coast, ensuring that no major heat waves are likely, at least not in the next two weeks,” Bespoke said Friday.

Still, the folks at NatGasWeather expect a very warm/hot early-summer pattern to continue into early July, except for a few small sections of the U.S.

And with production also weighing heavily on prices, “it will be important to see if prices retract from this level again on profit taking, or will they finally take out $2.63,” the weather agency said.

NGI’s Pat Rau, director of strategy and research, agreed production data is weighing heavily on market players, saying it’s universally known that prices have been uneconomic over most of the U.S. the last year-plus.

“And with the rapid decrease in production of unconventional wells, the lack of drilling activity in recent quarters is going to catch up with production figures,” Rau said. “That’s the reason people are watching year-over-year production comparisons so closely.”

With most of the Lower 48 still rather uneconomic at today’s price strip, Rau said that scenario argues there is still room to the upside.

However, Rau noted that the U.S. drilling rig count is starting to tick higher. “That could begin to rein in year/year production comps pretty soon, which could keep a lid on short-term prices from rising too much more,” he added.

Genscape’s Rick Margolin, senior natural gas analyst, was in agreement, saying any additional upside to prices is limited due to the volume of production “sitting on the sidelines ready to come into the game.”

“Current production volumes have backed off in the wake of capex reductions from a few months ago, as well as a fairly high level of maintenance as producers ride out the low price environment,” Margolin said.

“But we also know there’s roughly 0.8-1.0 Bcf/d of production that was running but has since been shut-in or choked back because of low prices. That stuff can come back online pretty quick should regional basis prices get strong enough,” he said.

Margolin also pointed to the volumes available from the national inventory of drilled but uncompleted wells. “We’re already seeing producers drawing down those inventories for the first time in years,” he said.

In addition, he said producers signaled in first quarter earnings reports that they can resume growing production with a crude price in the low $50/bbl area, and/or gas around $2.15/MMBtu in places such as the wet Marcellus.

“On top of all this is the fact so many storage facilities are so full so early in the injection season. So bottom line, any price rise resulting from increased demand is likely to be quickly met with an influx of production that’ll have to price itself into the demand market instead of the storage market,” Margolin said.

Rau agreed that any near-term upside in prices will likely be capped if excess gas in storage doesn’t exit the summer closer to its five-year average.

This week marked the sixth consecutive reported reduction in the surplus versus the five-year average, according to Mobius Risk Group, which expects additional surplus reductions over the next three storage reports.

“While there have been comments in the marketplace regarding an end of October storage trajectory of sub 4 Tcf, we would view a build near market expectations as contrary to this viewpoint. By our estimation, it would require an injection of 61 Bcf or lower to support a sub-4 Tcf trajectory,” Mobius said.

In addition, the subsequent 12 weeks would likely need to demonstrate an average injection of 41 Bcf, Mobius said.

The potential for this to occur will be heavily dependent upon a continuance of the warmer-than-normal weather seen in June, it said.