Analysts are all expecting continued growth in natural gas exported to Mexico, but how Mexico chooses to deregulate will have a big influence on the opportunities created by this emerging market, according to Michael Thomas, COO of natural gas for BP Energy Co. 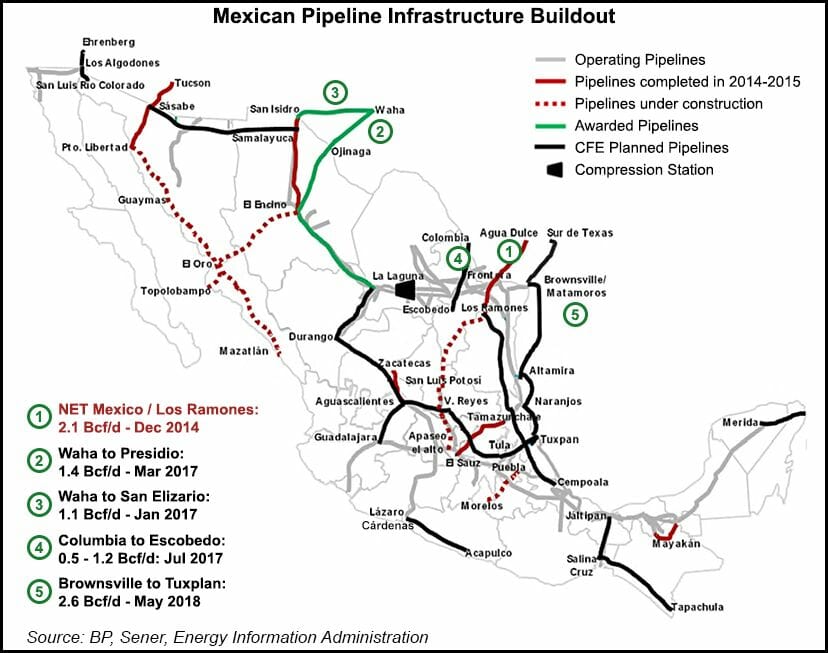 “What we’re focused on and [what] other trading/marketing businesses [are focused on] is being proactive in helping Mexico deregulate,” Thomas told attendees of the 21st Annual LDC Gas Forums Northeast conference in Boston Tuesday.

Driven by the industrial and power sectors, Mexican demand for U.S. gas via pipeline has increased by about 2 Bcf/d since 2011, with that figure expected to increase anywhere from 2 Bcf/d to 5 Bcf/d over the next several years, he said.

According to the 65th edition of the BP Statistical Review of World Energy, which the company released this week, Mexico saw the largest global volumetric increase in net pipeline imports in 2015 with a 44.9% bump (see Daily GPI, June 8).

“And we have put people in Mexico City, we are working closely with the regulators down there, trying to get more of a U.S.-type of regulatory model, which will allow us and others to participate in that model,” he continued. “It’s moving really fast. I think the problem we’re concerned with is that it’s moving so fast that some of the rules may not be put in place correctly, and you may have a situation where you’ve got affiliates of the incumbents that are able to take market share and market power and not really open it up and make it a competitive environment.”

As for liquefied natural gas (LNG) exports, the global demand outlook continues to suggest the market is headed for an oversupply, Thomas said, pointing to about 19 Bcf/d of export capacity expected to come online globally by 2018. Asian and European indexes have fallen alongside the collapse in Brent prices, and “if you get any type of bullishness up to $4/MMBtu [Henry Hub], even if you’re considering your shipping costs sunk, you’re not exporting these facilities.”

In a global supply-demand imbalance, U.S. terminals could be the first to see the squeeze, he said.

“Global production will increase by 50%. When I think about where the marginal molecules are going to come from…that spot in Russia [where its LNG trains are located] has no domestic demand. Australia, the areas where those LNG facilities are, there’s no domestic demand. They have no alternative compared to us. In the U.S., we didn’t have a winter last year, and so all the sudden you put it into the natural gas generation sector. We’ve got storage. The rest of the world doesn’t have anywhere close to the level of storage we have. So it’s hard for me to see that they would be shutting off Australia or Indonesia or Russia any time before you look for alternatives in the U.S.”

The North American gas market is more globally tied than ever before, he said.

“They extended the production tax credits and investment tax credits for five years” leading to growth in solar and wind capacity, Thomas said. “Natural gas is there to provide support for the renewables, but on strong wind days or solar days, it does take away peak demand. We are seeing an increase in natural gas in the power sector with prices being low versus coal. We’ve seen a significant amount of switching, but it is pretty concerning to me that you see this type of renewables growth from a gas demand perspective, whether or not it’s going to eat into the amount of gas that’s used in the generating sector.

“…If you’re just talking about pure demand, [renewables] will take away from the gas demand,” he said. “[There is] still a lot of uncertainty with the EPA, the Clean Power Plan. Our read of it is that it’s not really supportive of natural gas. When you run the sensitivities without and with, there’s really not a material change in the amount of gas consumption, and some of the verbiage is actually pretty negative around natural gas. It’s like, ”Don’t build any new natural gas, just run old plants until we can get renewables in place.’ So a big concern as to how that plays out as well as all the other regulations that are coming online.”

Thomas said BP and others in the industry need to do a better job communicating with the public on the environmental benefits of natural gas. He referenced recent examples of anti-shale positions staked out by government officials, such as the French energy minister proposing a ban on U.S. shale gas imports to go along with the country’s hydraulic fracturing ban (see Shale Daily, May 23).

“We’re going right now to Northeast regulators, politicians, talking about BP, talking about natural gas, trying to promote the story, and they had the exact same message for us, exact same. They said, can you just provide us conventional gas? We don’t want shale gas…they were very serious that they just wanted conventional gas and don’t want shale gas, so it’s not just the French energy minister,” Thomas said. “We’ve had conversations over the last few weeks where we’ve seen people say ”I don’t want the shale, give me the conventional.’

“…We just need to make sure we’re telling a balanced story and educating people on what the opportunities are for natural gas…longer-term, if we want this to be sustainable, I think we need to be part of the conversation.”