Nearly 59% of voters in Barnett Shale town Denton, TX, chose to ban hydraulic fracturing (fracking), making it the first Texas city to do so. An oil and gas trade association immediately sought an injunction. The stage is set for lawsuits from mineral owners and energy companies. 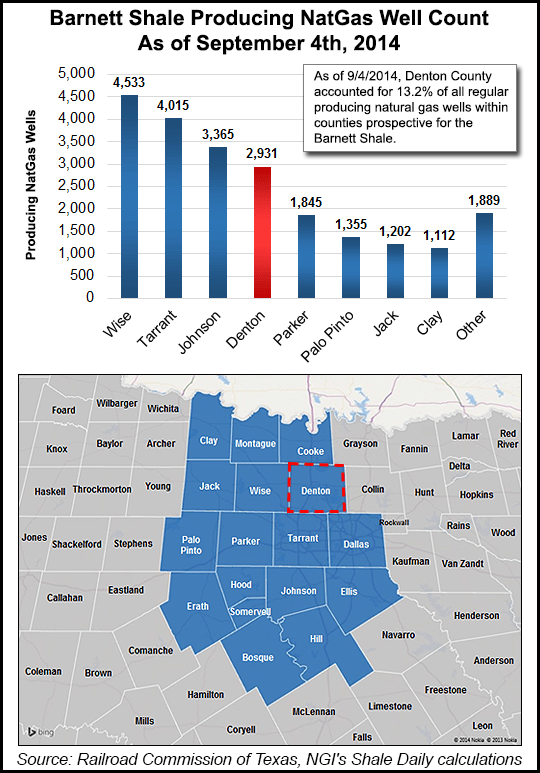 Denton resident Cathy McMullen, who was a leader of Denton’s anti-fracking campaign (see Shale Daily, April 10), was jubilant in a blog post on the Frack Free Denton website Wednesday. She had a warning for the oil and gas industry.

“We tried for years to get government and industry to work with us. And they wouldn’t. This was the only way left open to us. And so we took it,” she wrote. “If you want to prevent more bans, especially in towns that know drilling best, do yourselves a favor and listen to concerned citizens. Because if you don’t, you may wind up reaping what you’ve sown.”

Whether the fracking ban sticks in Denton is another matter. Earlier this year at a city council meeting, residents both for and against fracking were told that the city cannot usurp state law by banning fracking because doing so prevents drilling and infringes on the property rights of mineral owners. At that meeting, council voted down enacting a ban of its own and decided to put the question to voters (see Shale Daily, July 16).

“It is unfortunate that many Denton voters were misled into believing that Denton could violate the Texas Constitution by superseding the [Texas] Railroad Commission’s regulatory authority over oil and gas drilling and illegally take private property in the form of mineral rights,” Ed Ireland, executive director of the Barnett Shale Energy Education Council, told NGI’s Shale Daily Wednesday.

“As the mayor of Denton said, the vote [Tuesday] is just the beginning because the ultimate outcome will be determined ‘in the courthouse or the statehouse.’ Whatever the ultimate outcome, the losers will be the taxpayers in the city of Denton as they pay for long and costly legal battles.”

Many of the gas wells in Denton cannot be produced without the use of fracking, so a ban denies many mineral interest owners the right to gain value from their property, despite the state’s policy favoring development of natural resources, said lawyer Thomas Phillips, who represents the Texas Oil & Gas Association (TXOGA).

“…TXOGA believes that the courts of this state should give a prompt and authoritative answer on whether Denton voters had the authority under state law to enact a total ban on hydraulic fracturing within the city limits. To that end, TXOGA [Wednesday] filed a declaratory action and request for injunctive relief against the city of Denton on the grounds that a ban on hydraulic fracturing is inconsistent with state law and therefore violates the Texas Constitution…”

Texas General Land Office Commissioner Jerry Patterson is also suing to block the ban. Additionally, at least one mineral owner, Charles Chandler Davis, has sued the city of Denton over a moratorium on new drilling permits established earlier this year amid the anti-fracking debate (see Shale Daily, Sept. 12; May 12).

Analysts at ClearView Energy Partners LLC called Tuesday’s anti-fracking vote “a major symbolic victory for environmentalists who have pursued local moratoria as a means of deterring drilling or, at minimum, eroding scale economies within producing regions by fragmenting formations. We expect the Texas Railroad Commission (RRC) to contest the Denton ban, but we would suggest that it may already have invigorated future environmental efforts.”

David Porter, one of three commissioners on the RRC, said, “As the senior energy regulator in Texas, I am disappointed that Denton voters fell prey to scare tactics and mischaracterizations of the truth in passing the hydraulic fracturing ban…This issue will continue to be hotly contested. I am confident that reason and science will triumph, and the ban will be overturned.”

The fracking issue spawned the most expensive campaigning in Denton’s history. The pro-fracking camp, represented by Denton Taxpayers for a Strong Economy, was largely supported by energy industry contributions and handily outraised and outspent opponents Pass the Ban (see Shale Daily, Oct. 8). Pass the Ban received much of its support from environmental group Earthworks in the form of in-kind contributions.

Prior to Tuesday’s vote, the Lone Star Chapter of the Sierra Club wrote of Denton’s anti-fracking movement, “…[T]his is a big step for citizen-led movements against unimpeded fracking in a state that has deep, historical ties to the fossil fuel industry. It is precedent-setting and should illuminate the legal and regulatory battle lines on which future efforts to protect Texans from the dangers of fracking will be fought.”

Considering that for generations Texas has been the nation’s leading energy breadbasket, oil and gas drilling, and related infrastructure development have been generating a surprising amount of friction in the state over the last couple of years.

Also in Dallas, driller Trinity East Energy LLC is suing the city for millions of dollars after the city council voted last year to deny the company the permits it needed to drill on leases for which it had paid the city more than $19 million (see Shale Daily, Feb. 14). As in Denton, that lawsuit had been anticipated prior to the city council action.

And on the infrastructure front, the RRC is in the midst of possibly making modest revisions to the procedure for granting pipeline rights of way and establishing eminent domain. Some landowners have been complaining that it is too easy for pipeline companies to establish eminent domain and lay pipeline across their land (see Daily GPI, Sept. 15).

The 84th Texas Legislature begins Jan. 13, and it is sure to see bills relating to mineral and landowner rights among other energy-related issues.