Denbury Inc. has a preliminary agreement in hand to transport and store carbon dioxide (CO2) captured from a potential “clean” ammonia project in Geismar, LA. 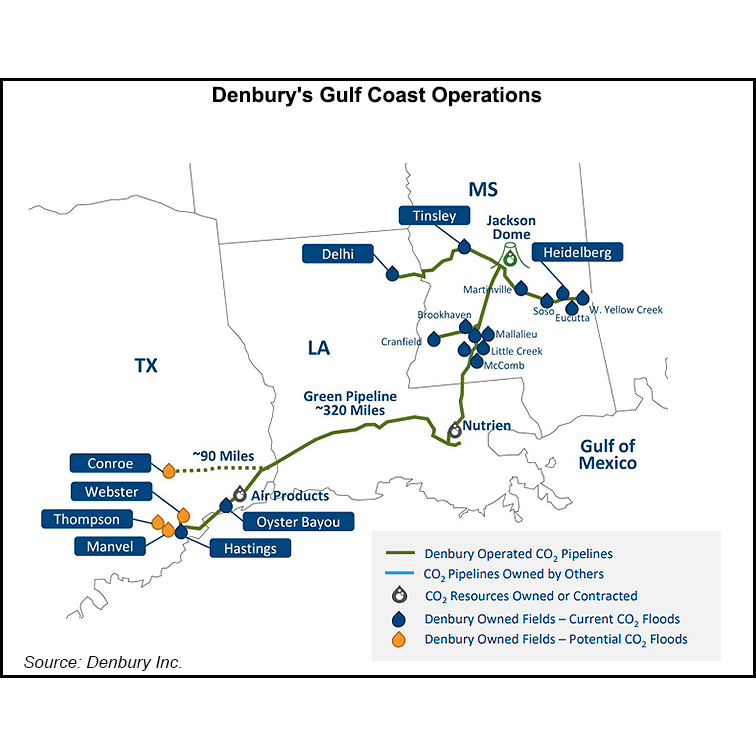 Denbury Carbon Solutions, a unit of the independent oil and gas producer, would use CCUS to transport up to 1.8 mmty of CO2 from the new facility. Denbury has used captured CO2 in its enhanced oil recovery operations.

Denbury CEO Chris Kendall said he thinks that “CCUS-enabled clean ammonia will be an important source of energy in a lower-carbon future, and we are honored by the confidence and trust that Nutrien has continued to place in Denbury to provide this important service.”

Denbury is considered one of the leading CCUS experts in the exploration and production field. It has long used CO2 for its enhanced oil recovery operations. Last fall, it teamed up with Mitsui & Co. Ltd. to evaluate carbon-negative oil projects on the Gulf Coast.

The proposed Geismar project is in the front-end engineering design phase, with a final investment decision expected in 2023. If approved, full production could begin by 2027.

Nutrien would pay Denbury to transport and sequester the CO2 in underground containment sites. The initial agreement is for 12 years, with up to two five-year extensions. No financial details were disclosed.

“Nutrien is optimally positioned to supply global emerging clean ammonia markets and grow a pathway for a decarbonized supply chain,” said Nutrien’s Raef Sully, CEO of Nitrogen and Phosphate. “It is another example of how we are building on our expertise in low-carbon ammonia to decarbonize the agriculture industry while also developing a source of clean energy.”

Nutrien also is working on a CCUS project in Western Canada, dubbed the Alberta Carbon Trunkline.

The Denbury-Nutrien agreement could expand the companies’ efforts to reduce atmospheric emissions by capturing industrial-sourced CO2 for permanent underground storage. In 2013, Denbury began transporting CO2 captured from Nutrien’s existing nitrogen facilities in Geismar. Denbury has a CO2 pipeline system that is less than one mile from the Geismar infrastructure.

Over the past nine years, the partnership has led to permanent underground storage of nearly 3 mmty of CO2. The partners also have produced more than 2 million bbl of carbon-negative or “blue” oil, which uses CO2 injected in the ground to produce oil.

Including the agreement with Nutrien, Denbury said it has cumulative CO2 transportation and storage agreements totaling about 7 mmty. In addition, the producer said it has secured several agreements to develop underground CCUS sites in Alabama, Louisiana and Texas, with a total potential capacity of more than 1.4 billion metric tons.

Denbury said it is currently moving more than 14 mmty of CO2 in the United States through its 1,300-plus miles of CO2 pipelines. Nutrien produces and distributes about 27 mmty of potash, nitrogen and phosphate products worldwide.