The U.S. Energy Information Administration (EIA) on Thursday reported a natural gas withdrawal of 36 Bcf from storage for the week ending Oct 30, exceeding the market’s expectations. 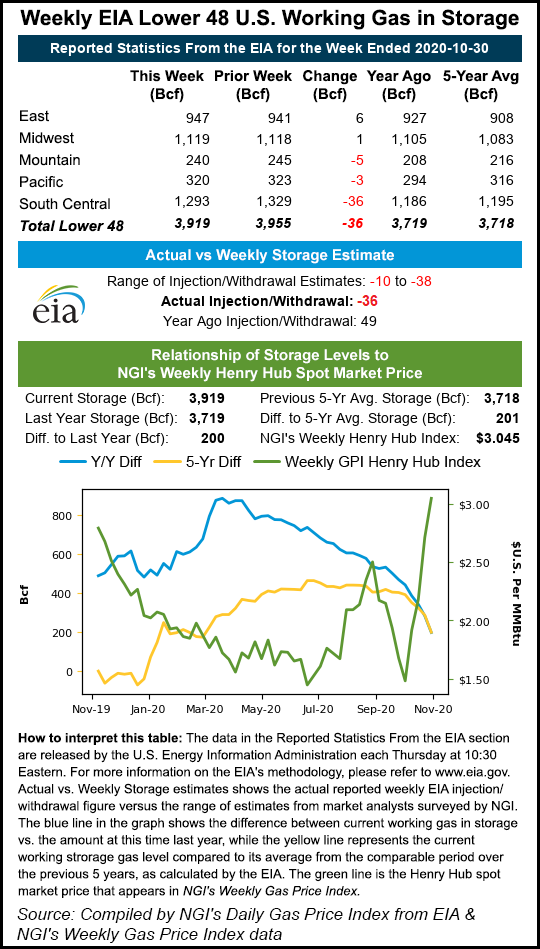 It marked the first pull of the season and arrived two weeks early when compared to historical norms. The decrease reflected chilly weather during the covered week and production shut-ins in the Gulf of Mexico ahead of Hurricane Zeta’s arrival last Wednesday.

Nymex natural gas futures climbed higher early in anticipation of the reduction in stocks. However, they reversed course after the EIA report as analysts looked to the potential for injections in November given a warm weather start to the month and expectations for more comfortable temperatures ahead.

The result was particularly bullish relative to a year earlier, when EIA reported a 49 Bcf injection, as well as the five-year average build for the week of 52 Bcf.

Genscape Inc.’s Eric Fell said the withdrawal marked the first stockpile drop during the month of October in more than 10 years.

“This earlier than normal start to the withdrawal season is due to a very tight supply/demand equation along with a strong cold shot over the last full week of October,” Fell said on The Desk’s online energy platform Enelyst. He also noted strong gas export levels to Mexico and increasing demand for liquefied natural gas (LNG) exports.

Injection results from each of the three previous storage reports were bullish relative to median expectations.

The decline for the latest covered week reduced inventories to 3,919 Bcf, compared with the year-earlier level of 3,719 Bcf and the five-year average of 3,718 Bcf.

By region, the South Central withdrawal of 36 Bcf led the way. It included a 23 Bcf pull from nonsalt facilities and a reduction of 12 Bcf from salts. EIA noted totals do not always equal the sum of components because of independent rounding.

Looking ahead, participants on the Enelyst platform said forecasting storage results for the next two weeks could prove dicey. High temperatures ranging from the 50s to 80s across most of the Lower 48 this week are bound to curb heating demand, and forecasters are predicting a mild November overall. However, LNG volumes have been strong all week – at or above 10 Bcf – supporting demand.

Early estimates for the next couple storage reports, covering the first two weeks of November, range from slight withdrawals to modest injections.

Bespoke, which has modeled a build of 5 Bcf for the next EIA report and an injection of 10 Bcf for the following week, said the market Thursday morning appeared focused “on the high-end warm weather pattern” pervading the Lower 48 this week and the likelihood of diminished demand this month.