Persistently anemic weather-driven demand and weak spot prices once again weighed down natural gas futures on Friday, marking a fifth-consecutive day of losses and culminating a brutal week that saw the prompt month give up nearly 50 cents in total. 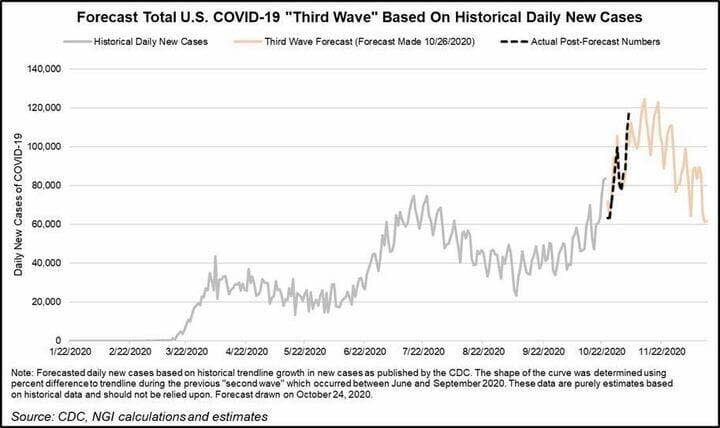 As they did all week amid mild weather across the country, spot gas prices declined, led lower by drops in the Midwest and Northeast. NGI’s Spot Gas National Avg. dropped 22.0 cents to $1.950.

Temperatures shifted from chilly in late October to unseasonably comfortable throughout the Lower 48 early this month. Forecasters expect that, by Nov. 10, gas demand would have dropped more than 100 Bcf from the beginning of the month. Further declines are broadly expected.

In fact, forecasts grew increasingly bearish throughout the week.

“We reduced our demand forecast by a few more gas-weighted degree days today, making for a warmer change every single day this week, and it still appears likely that warmer-than-normal weather will roll into the final third of November as well,” Bespoke Weather Services said Friday. “High-end warmth is giving us demand equating to roughly 120 Bcf below normal, just in the next 15 days, enough to overwhelm the balance story… As long as we stay this warm, it is difficult to move back higher.”

Even Thursday’s Energy Information Administration (EIA) storage report, which showed the first withdrawal of the season and reflected tight supply/demand balances, “could not halt the decline,” Bespoke said.

EIA reported a withdrawal of 36 Bcf for the week ended Oct. 30. It was the first October pull in more than 10 years and exceeded expectations. The result compared to a 49 Bcf injection a year earlier and the five-year average build for the week of 52 Bcf.

Still, EIA said Lower 48 inventories finished the latest covered week at 3,919 Bcf, 200 Bcf higher than a year earlier and 201 Bcf above the five-year average. Without normal November weather demand in the northern reaches of the country, analysts said storage injections are bound to resume, reigniting concerns about balances.

Bears “latched onto warming weather forecasts, which are about to throw us back into injection territory,” analysts at Tudor, Pickering, Holt & Co. told clients Friday. The firm’s early modeling suggests a 12 Bcf injection for next week’s report.

U.S. liquefied natural gas (LNG) exports to fuel heating needs in Asia and Europe could help soak up excess supply and quell imbalance worries. Daily feed gas deliveries to LNG facilities exceeded 10 Bcf throughout the week, hovering around record levels and far above the recent summer lows of about 2 Bcf reached amid the demand destruction caused by the coronavirus pandemic.

Export demand, however, is in part dependent on continued economic recovery and increases in commercial and industrial energy needs, both of which are vulnerable to new and ongoing virus outbreaks, particularly in Europe. Germany, France and others this month announced new business restrictions in efforts to contain intensifying virus spread.

“Covid-19 has returned with a vengeance and several countries are reporting infection counts higher than they ever had,” said Rystad Energy analyst Bjornar Tonhaugen.

The pandemic is also escalating domestically, particularly in the Upper Midwest, a vital region for natural gas demand. The United States tallied 121,888 new coronavirus cases on Thursday alone, according to Johns Hopkins University data, up nearly 20% from the prior day.

The presidential election, still undecided as markets closed Friday, added another layer of uncertainty. Democrat challenger Joseph R. Biden led incumbent Republican President Trump, while the GOP was expected to retain control of the Senate and gain seats in the Democrat-majority House.

That left markets on Friday to digest the likelihood of a divided government, which would limit the probability of tax hikes or increased regulation on the energy sector. But it also could hamper the odds of passing a new stimulus package to prop up an economy that is still struggling amid the ongoing pandemic.

“So there is no mandate from a blue wave,” analysts at the Schork report said. “This likely means gridlock.”

Benign weather that generated little heating or cooling demand all week is expected to extend into next week across most regions.

“Warmer-than-normal conditions continue across the U.S. with perfect highs of 70s and 80s over the southern” areas of the country, with the exception of 90s over the Southwest. “The northern U.S. is also quite comfortable for this time of the year with highs mostly in the 60s to lower 70s,” NatGasWeather said.

“Colder air is still expected into the West and Plains late this weekend and next week, although the intensity and coverage of subfreezing air has decreased considerably. National demand will still increase slightly late next week as cold air over the Plains spreads across the rest of the Midwest with lows of 10s to 30s,” the forecasts said. “But what continues to make the coming pattern quite bearish is warmer than normal conditions are forecast to hold over the East through Nov 20. As such, until more impressive cold arrives across the Midwest and East, bearish weather headwinds will continue.”

Deliveries have averaged 148 MMcf/d during the last 30 days and the 736 MW Newman power plant is the largest generator in El Paso Electric’s generating portfolio, Genscape said. The plant serves Southern New Mexico and the panhandle of Texas. “There is potential for these maintenance-impacted volumes to back up towards the Permian Basin,” the firm said.