The Dakota Access Pipeline (DAPL) is free to keep flowing Bakken Shale oil while an environmental impact statement (EIS) is completed after a coalition of Native American Tribes failed in the first test for an injunction. 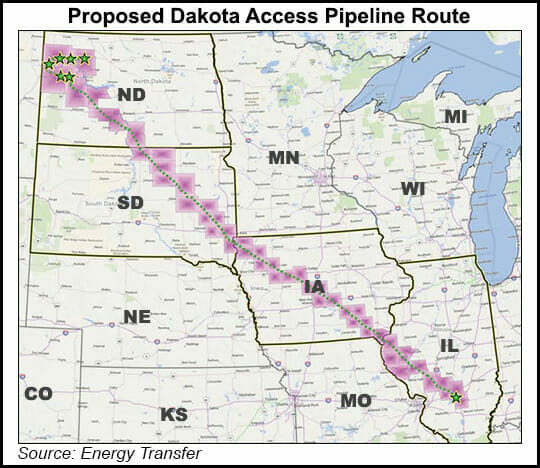 U.S. District Court for the District of Columbia (DC) Judge James Boasberg last year axed a key permit for the pipeline to cross underneath Lake Oahe, which necessitated the EIS. In seeking an injunction, the tribes, led by the Standing Rock Sioux, failed to demonstrate that — among other things — they would likely suffer irreparable harm in the absence of an order closing the pipeline.

“Whether framed in terms of likelihood or imminence, Plaintiffs have not made a successful showing of irreparable harm based on the threat of an oil spill at Lake Oahe,” Boasberg said in his decision. “Not only do they fail to engage with Dakota Access’ evidence that a large, damaging, irremediable spill is unlikely, they never actually point to evidence suggesting that such an incident is likely. That will not do.”

Noting “all of the headlines and controversy” the litigation surrounding DAPL has spawned, “its tangible consequences for the pipeline itself have been few,” Boasberg said. “Even though this Court vacated the easement for DAPL to cross beneath Lake Oahe, and even though the DC Circuit affirmed such vacatur, the pipeline has maintained operations as if none of these developments had occurred.”

For all the “twists and turns” the legal battle has taken, Boasberg placed blame squarely on the Army Corps of Engineers for their inaction throughout. Ever since the court’s vacatur order last July, and across two presidential administrations, the Army Corps has “conspicuously” declined to adopt a conclusive position regarding the pipeline’s continued operation, he said. This has occurred despite repeated prodding from the DC Court and the Court of Appeals to do so.

“On the one hand, the agency has refrained from exercising its enforcement powers to halt Dakota Access’ use of the pipeline, notwithstanding its status as an unlawful encroachment,” Boasberg said. “At the same time, however, neither has the Corps affirmatively authorized the pipeline’s occupation of the area underneath Lake Oahe per the process contemplated in its internal procedures.

“Its chosen course has instead been — and continues to be — one of inaction. Such indecision, it is important to note, does not stem from a lack of time. Nor from a lack of attention. Whatever the reason, the practical consequences of the Corps’ stasis on this question of heightened political controversy are manifest: the continued flow of oil through a pipeline that lacks the necessary federal authorization to cross a key waterway of agricultural, industrial and religious importance to several Indian Tribes.”

The Army Corps has indicated its plans to finalize the EIS next March, with the relevant authorizations possibly following as soon as next April.

ClearView Energy Partners LLC said the tribes may appeal Boasberg’s denial of their injunction motion to the U.S. Court of Appeals for the D.C. Circuit. If that proves unsuccessful, they could turn to the U.S. Supreme Court.

“That said, we don’t think they would be any more successful there than in Judge Boasberg’s court,” the ClearView team said.

However, the ClearView analysts said a D.C. Circuit’s January ruling plainly suggested that the tribes or other parties may have grounds to seek an injunction under the Administrative Procedure Act (APA). This would be a different proceeding than the multi-month injunction process that just concluded, as that question has not been placed before either the district court or the appellate circuit.

It’s also not certain that an APA-based appeal would lead to a successful injunction on operations before the EIS is concluded, according to ClearView. Even if the tribes decide to mount such an offensive, a balance of equities question related to the impact of a shutdown – which was not addressed in this context of Friday’s ruling – would still loom, it said.

Tudor, Pickering, Holt & Co. analysts said although the Corps have said they remain in a state of continuous evaluation and could pursue enforcement action in the future, “this decision by the court materially improves the odds of pipeline operations continuing through the entirety of the EIS review process.”

Furthermore, Friday’s ruling removes a hurdle to increased upstream activity in the Bakken, according to TPH. The analyst team noted that the current horizontal rig count of 15 is being “closely watched” approaching the summer months.