The Senate Energy and Natural Resources Committee voted Tuesday to report out President Trump’s nomination of James Danly to be a member of FERC, but only after complaints from several members about the White House stalling on more nominations. 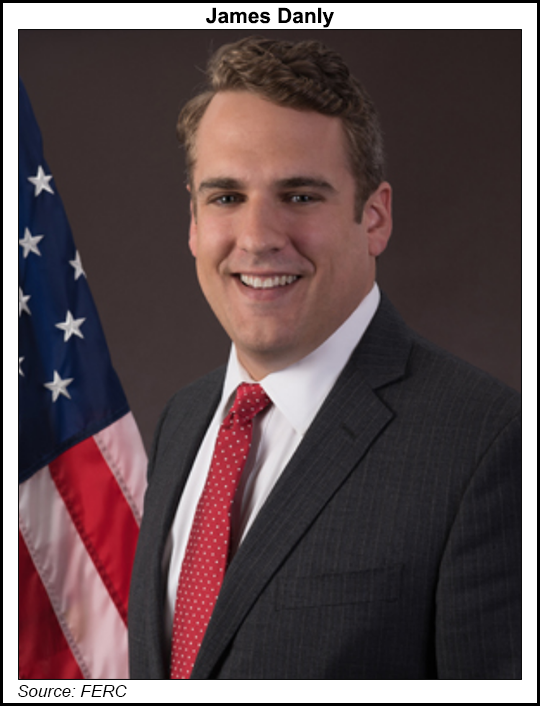 If confirmed by the full Senate, Danly, who is general counsel at the Federal Energy Regulatory Commission, would take over one of the two current vacancies on the panel, effectively replacing former commissioner and Chairman Kevin McIntyre, who died in early 2019.

Danly was first nominated by Trump in October and that nomination was voted out by the committee in November. The full Senate, however, failed to vote on the confirmation during 2019 and the nomination was returned to the White House Jan. 3. Last month, Trump again nominated Danly to fulfill the remainder of McIntyre’s term, which would expire June 30, 2023.

Bernard McNamee has said he would leave FERC at the end of his current term, which is set to expire June 30, though he has the option of remaining at FERC through the end of the year.

If McNamee’s exit were to come before Danly’s confirmation, it would leave the traditionally five-member FERC with only two commissioners – Republican Neil Chatterjee, who is chairman, and Democrat Richard Glick. Chatterjee’s term is set to expire in 2021 and Glick’s in 2022.

As he has for several months, ranking member Joe Manchin (D-WV) called on the White House to nominate a Democrat to the traditionally five-member FERC. Manchin and other Democrats have been lobbying for Allison Clements, a former senior attorney at the Natural Resources Defense Council, to be nominated to FERC. Trump administration officials have reportedly met with Clements this year, but the White House remains mum about further nominations to FERC.

“We’ve had a good nominee who’s been vetted very, very stringently for quite some time now, and it’s a shame that the politics have entered into it and they will not give us a pairing on this,” Manchin said. “It truly is a shame, and I say that with all due respect. It’d be different if they said, ‘hey, this person’s not qualified, we have someone else we want you to recommend.’ Give us any types of directions on this whatsoever. We’re getting nothing — nothing.

“I want to thank the White House, because I do know that the lady we’re speaking of had been over to the White House, they were very impressed with her, and still nothing’s come out. There should be a pairing. I’m not going to vote against Mr. Danly, because he is qualified and because two wrongs don’t make a right. It’s just a shame, and I hope all of us in a bipartisan way will say ‘we need a working FERC,’ and we should have a working FERC with qualified people and we would then encourage the White House to please give us that name.”

The committee vote was 12-8 to send the nomination to the full Senate, with all Republicans on the committee, joined by Manchin, voting for the motion, and the eight remaining Democrats voting against.

Ron Wyden (D-OR) said he voted against the nomination because it would “stack the deck at FERC.” According to Martin Heinrich (D-NM), “FERC is not working.”

FERC “has become a political ping-pong match, like everything else around here, and it used to be a real regulatory agency,” Heinrich said. “If you look at some of the capacity rulings and other things coming out of the FERC today, it is reprehensible. I think that’s on all of us. I think we can do a lot better. There was a time when nominees to the FERC moved forward together, and then members of FERC worked together. That is not the case today.”

Chairman Lisa Murkowski (R-AK) promised that she would move any nominees quickly through the committee, but said the process depends on the White House doing its part.

Senators on the normally staid committee continued to argue against the motion even after it was passed.

“I don’t quite understand why we went through what we just went through,” said Angus King (D-ME). “Why didn’t we hold and say ‘we as a committee say we want both nominees together, and we’re not going to hold hearings and not going to move them until then.’

“…My point is, if we’re going to approve one without requiring the other, there’s no incentive on the White House to put anyone forward. We’ve given them what they want here.”

“Senator Manchin and I have said [to the White House], ‘Look, bring us the nominees and this committee will take them up,'” Murkowski said. “I don’t have any hesitancy in doing that, but I can’t do anything if there’s no nominee that comes forward. The name of the individual on the other side has been around there for months or a year now, and Senator Manchin is right — as I understand it, the White House has met with her, but they have yet to send her forward. So, any influence that any of you have on the White House to send that name forward–“

“I disagree, Senator King, I don’t think that we gave up that influence,” Murkowski said. “We’ve got not only this seat that remains to be filled, but…we will have an additional one, yet another one, in just a matter of two months.”

Prior to his appointment to serve as FERC general counsel in 2017, Danly was a member of the energy regulation and litigation group at Skadden, Arps, Slate, Meagher and Flom LLP. He previously served as law clerk to Judge Danny Boggs on the U.S. Court of Appeals for the Sixth Circuit.