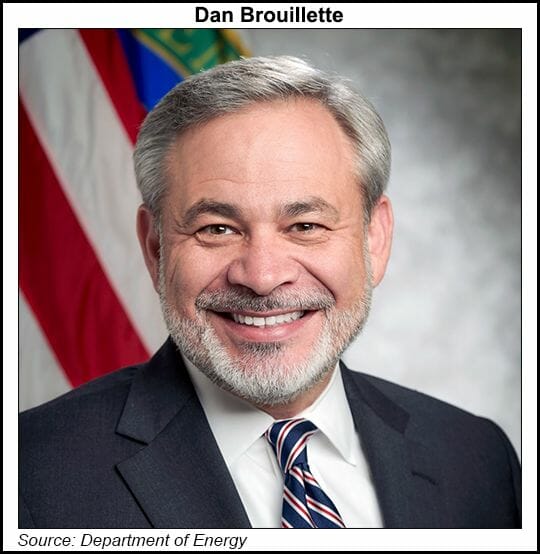 Brouillette, who is deputy secretary at the Department of Energy (DOE), would become DOE secretary when he is sworn in, replacing Rick Perry, who announced in October that he would step down this year.

“I want to thank President Trump for placing his confidence in me to help advance America’s national security, energy security and economic security through groundbreaking science, technology and innovation,” Brouillette said. “I also would like to thank the Senate for its expedient review of my nomination and for the bipartisan support provided to me during the nomination hearing” and Monday night’s vote.

“Together, we will build upon the historic progress in energy made under Secretary Perry’s leadership, making our country safer, more prosperous, and secure. I am excited for what the future holds, as our Department continues to make a lasting impact both domestically and around the world.”

The Senate confirmed Brouillette to DOE’s second highest position in August 2017. He had been head of public policy for USAA. He also is a former vice president of Ford Motor Co. and previously served as chief of staff to the House Committee on Energy and Commerce. He also served as assistant secretary of Energy for Congressional and Intergovernmental Affairs from 2001-2003 and was a member of the Louisiana State Mineral and Energy Board from 2013-2016.

The Senate Committee on Energy and Natural Resources voted Brouillette’s nomination through to the full Senate last month.

“From energy security to technological innovation, Dan’s leadership will be critical for the Department of Energy and for our country,” said committee Chairman Lisa Murkowski (R-AK) following the vote Monday. “As Secretary Perry departs from DOE, I also thank him for his service, and wish him all the best in his next endeavors.”

Brouillette’s nomination was supported by 47 Republican and 23 Democratic senators. Fifteen Democrats voted against the motion and 15 senators were recorded as not voting.