Wednesday afternoon, Dallas City Council voted to deny Trinity East Energy LLC three permits it needed to drill on leases within the city for which it has already paid $19 million, setting the city up for a possible legal challenge from the company that could end up costing it millions before the nearly five-year saga is over. 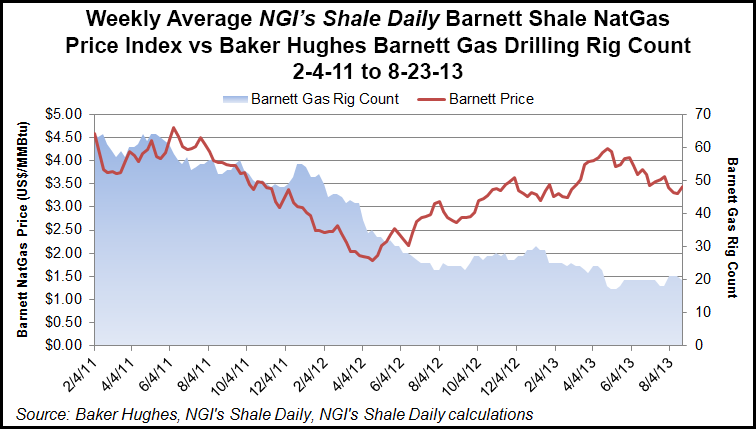 Trinity East had asked the council to overturn previous rejections by the Dallas Plan Commission of special use permits (SUP) it needed to drill on leases in the eastern frontier of the Barnett Shale (see Shale Daily, March 25). The company needed at least 12 of the 15 council members, a super-majority, on its side to overturn the denials. In three separate votes, one for each of the SUPs, it got the approval of nine members.

It was the first time the council had voted on drilling within the city. Had Trinity East prevailed, it could have been the first company to sink a well there.

The six council members voting against Trinity East decided that they’d rather head off the possibility of the company drilling than play chicken with natural gas prices. The thinking of Dallas Mayor Mike Rawlings and a majority of council members — some opposed to urban drilling but voting for Trinity East — was that natural gas prices would not rise enough to make the wells economic in time for the company to drill wells by Feb. 15, 2014, when the leases would expire without drilling.

When Dallas made the leases with Trinity East, natural gas was going for $8.00-12.00/MMBtu, Rawlings said in a speech before the council votes during which he practically pleaded with members to think about the prospect of a lawsuit. The mayor suggested that the wells would not be profitable at gas prices below $5.00/MMBtu.

“I predict there is no way Trinity East drills because it is not viable. Their only chance in the poker game is one high card: The chance that we deny these SUPs and they get to sue the city,” Rawlings said.

Prior to the vote, numerous citizens spoke for one minute each against drilling within the city, on parkland within a floodplain. Concerns also were raised about emissions from a natural gas compressor station proposed to be sited in the general area of a new multi-million-dollar soccer complex. The anti-drillers were impassioned but probably not as wound up as during previous meetings; there seemed to be a sense that the pro-drillers would not secure a super-majority.

Speaking in favor of the permits were Trinity East representatives, area business people and some who claimed oil and gas industry experience, engineers and geologists. Several cited drilling activity and the revenue it has generated in nearby Fort Worth.

“Just take a look 30 miles to the west. We have a prime example of what can be done in this industry in Arlington and Fort Worth,” Trinity East CEO Tom Blanton told the mayor and council. “Fort Worth has been now drilling for 12 years. I drilled one of the first wells in Fort Worth. I served on the first policymaking committee in Fort Worth. I understand how to drill with green processes. Look over there, thousands of wells, as has already been mentioned, and not one verifiable nonindustry health or safety issue has been reported in that area, Fort Worth or Arlington.

“Now that’s interesting, in contrast to what we continually hear and what I have heard over the last five years. We have wells in floodplains…We have wells in parks. We initially had a 300-foot setback in Fort Worth. It was later modified to 600 feet, which is what we’re talking about in this case and is what TCEQ [Texas Commission on Environmental Quality] says is adequate for air pollution and protection for the citizens…”

Following the vote, Blanton was asked by the Dallas Morning News whether a lawsuit would be coming from the company. “Oh, heavens, I don’t know. We’re so far from that,” he responded, the paper reported. Trinity East President Stephen Fort did not respond to a request for comment from NGI’s Shale Daily.

But Rawlings, who described the city’s wrangling with Trinity East in terms of a poker game, is girding for a legal battle.

“I recognize that the city leases do not contractually obligate the city to provide these locations. To the contrary, these leases reiterate that an SUP is required and the city has a police power that cannot be contracted away.”

However, the mayor said, denying the SUPs could cost the city millions of dollars for legal and other expenses. “While I cannot predict what anyone will do, I know personally I have heard the number of $100 million of costs that have been thrown out by this company several times. $100 million…I know that there’s a high chance of this [lawsuit] happening if we don’t call Trinity East’s bluff to drilling.

“I believe we should not fold because while we think this battle is over, if we vote this down I don’t think it will be.”