Crescent Point Energy Corp. plans to sell some of its noncore assets in the Williston Basin for a total of C$280 million in a pair of transactions expected to close by the end of the month, the Calgary-based company said Tuesday. 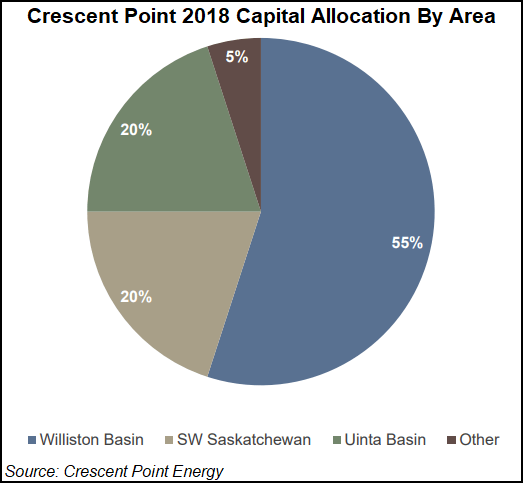 Crescent Point in early May said it signed a nonbinding letter of intent to sell Williston assets for about C$225 million; a second transaction, valued at about C$55 million, has also been agreed to. Buyers were not named.

Current operated and nonoperated production from the assets is about 4,800 boe/d.

As a result of the dispositions, Crescent Point adjusted its 2018 average production guidance to 181,000 boe/d, weighted 90% to oil and natural gas liquids, and exit production guidance to 190,000 boe/d. Capital expenditures guidance for 2018 remains unchanged at C$1.78 billion. Proceeds of the deals are to go toward debt reduction and strengthening the balance sheet, Crescent Point said.

Three years ago, Crescent Point scooped up 2,200 drilling locations on 422,000 acres of Williston acreage in North Dakota, Saskatchewan and Alberta, along with a Uinta Basin interest in Utah, in an all-corporate paper deal to take over Legacy Oil & Gas Inc. Crescent Point successfully completed its first stacked horizontal development in the Uinta Basin in 1Q2018, targeting the Castle Peak, Wasatch and Uteland Butte zones.

Crescent Point also announced that Ryan Gritzfeldt, a 14-year veteran of the company, has assumed the role of COO. Ken Lamont will remain CFO. Neil Smith and Tamara MacDonald, who had been COO and senior vice president-corporate and business development, respectively, have stepped down.

In late May, Craig Bryksa became interim president and CEO. Scott Saxberg, who had served as CEO since helping found Crescent Point 15 years ago, stepped down last month in the wake of shareholder votes rejecting both a dissident slate of directors and a motion to approve the company’s approach to executive compensation. In 2017 the compensation plan received 86% of shareholder votes; this year, support fell to just 39%.