The Appalachian Basin’s shale formations helped to birth the natural gas renaissance in North America, and the region now is poised to join the Gulf Coast as a major petrochemical hub, a group of experts said Monday. 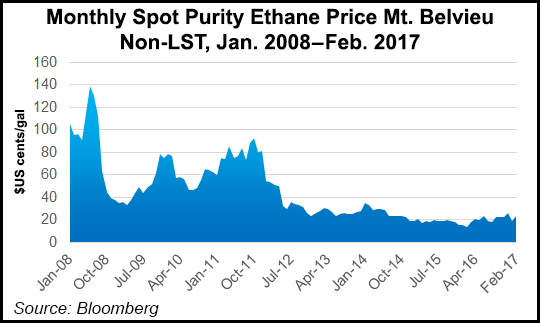 A webinar hosted by NGI’s Shale Daily, “Cracking the Ethane Code in Appalachia, delved into all sides of the petrochemical equation. Last spring a unit of Royal Dutch Shell plc made a final investment decision (FID) to build a multi-billion dollar cracker about 30 miles northwest of Pittsburgh, officially signaling that the region will be a major hub. Sited on 400 acres in Beaver County, adjacent to the Ohio River in Potter and Center townships, the project as designed would have capacity to produce 1.6 million metric tons/year (mmty) of polyethylene and 1.5 mmty of ethylene. Construction would require 6,000 people at its peak, while another 600 permanent employees would staff the facility when it becomes operational in the early 2020s.

Shell’s project will not only be huge, transformational in all ways, said an all-star panel of experts during the one-hour webinar. Joining NGI Associate Editor Jamison Cocklin, who was the moderator, were Consol Energy Inc.’s Don Rush, vice president of marketing, and James Cooper, senior petrochemical adviser to the American Fuel & Petrochemical Manufacturers trade group. Also joining in the conversation were Denise Brinley, special assistant to the secretary of the Pennsylvania Department of Community and Economic Development (DCED), and Danielle Sandusky, president of Denver-based Level 2 Energy, a risk management firm.

It was a long and intricate process to convince Shell to build the cracker, Brinley said. She was on the team that began initial discussions in 2011.

“That’s how long these deals take,” she said. “It was five years in the making in terms of discussing and building an incentives package for Shell to entice them to come here. We don’t want Shell to be the only ethane cracker in the region. And we think one of the best economic projects next would be PTT Global Chemical because it would shore up the region as a petrochemical hub.

Shell has said that without the economic development, job creation and investment savings it received from the state, the project would not have been possible. An incentive plan was crafted under former Gov. Tom Corbett that offered a package of tax credits that would allow the company to reduce its tax liabilities by up to 20% annually.

“Internally here at DCED, we’re trying to educate as many people in the economic development world as we can, and then cross over into the petrochem manufacturing sectors to make folks aware of this region,” Brinley said. The Gulf Coast “is so dominant with what they do, that a lot of times…we’re out selling the region and making folks know that we have a great resource here…to build on our strong manufacturing base.”

Pennsylvania “is a manufacturing state, and we’re really good at it. We’re nimble enough to advance this industry forward in meaningful ways for long-term benefits for our citizens…We are doing everything we can to position and market Pennsylvania as a great place to do business. We want to incentivize folks to look at this region. Take a second look, take a third look. One of the things that we know is critically important is having a ready site.

“So we’re going to be making an earnest effort particularly in the southwest area of the state to help get the site pad-ready for additional manufacturing opportunities. We think that it makes an investment a little bit easier when the site has all the necessary infrastructure in place and teed up and ready to go.”

Leaders from Ohio, West Virginia and Pennsylvania two years ago signed a memorandum of understanding (MOU) at the first ever Tri-State Shale Summit in Morgantown, WV, to spur regional development. The group has been “at the table since,” Brinley said.

“The Tri-State Shale Coalition has just rolled out an action plan for 2017…It’s broadly reliant on making sure we’re marketing and promoting the region holistically. A rising tide raises all ships. We all believe across state borders that we want to get the pie and we can fight over the size of the slices of the pie but we really think we all have a strong economic development base upon which to build.

“We’re trying to break down those barriers of competing across state lines…The marketing and promoting the region holistically will be really important in the upcoming year. We’re looking at regional transportation and infrastructure projects that will be meaningful to help toward the long-term viability of the resource.”

The coalition wants to connect area colleges and universities and is collaborating on ways to ensure there is an adequate and trained workforce.

“We know that 6,000 construction jobs that will be seen at the Shell cracker at its peak will be drawn from a regional workforce,” Brinley said. “So if other crackers come online, like PTT Global Chemical, Pennsylvanians will benefit as well. We’ll have participated in building one cracker here in our own state. Certainly, those resources can work across state borders for the benefit of all.”

“Purely from a volumetric perspective, you’ve got ethane production projected to grow to somewhere around 400,000 b/d or more,” Sandusky said. Shell’s cracker will pull 100,000 b/d out of that, “so volumetrically, absolutely there is plenty of room to supply a second or even a third cracker.”

However, it’s got to be at an economic price.

“If the economics aren’t quite as robust on the upstream side, you have to wonder if [potential entrants] will start taking a harder look at some of the other issues, where, for instance, you don’t have the redundancies of infrastructure and storage like you do on the Gulf Coast. So if you’ve got a company that is looking at one or both, then you might see that as a big advantage to the Gulf Coast.

“On the other side, if there is more local market, there’s an upside to building a cracker in the area. I think it’s going to be interesting to see those companies in the next few years weigh all of those [issues] if the economics aren’t the biggest slam dunk that they are expecting like Shell had.”

The question of whether there could be a second or third cracker “is definitely not an easy one to answer,” Rush said. “From where I sit and how I think about it, a lot of the infrastructure has been built up on the Gulf, where there is a source of low-cost supply. I do think if you look over time, if you are thinking in terms of decades instead of years, I think things will actually get incrementally built where there’s a low cost of supply and demand exists.

“I think for those two reasons, it’s attractive to try to put something additional here in the region. There’s definitely enough supply to support it, and the demand side looks OK to support it as well. Obviously, there are big capital decisions…The necessary ingredients are here, with the transportation already in place and a lot of the workforce stuff that Denise spoke to, points to sooner or later we’ll have another one in the region.”

PTT appears “serious” about wanting to build a cracker in Ohio, Cooper said. “The interesting part about the Ohio project is how quiet they were moving along and then all of the sudden, they made this announcement after they did quite a bit of work already. So that tells me that PTT is serious about the project and intends to inform me that the economics are going to work out for them.”

PTT recently announced that it would delay a final investment decision (FID) for the Ohio facility, which would produce 1 mmty of ethylene and consume about 65,000 b/d of ethane. The company said in 2015 it would invest $100 million for the plant’s preliminary design work. It now needs more time to review initial plans and said an FID would be made in late 2017.

“I definitely think another cracker is going to be built,” Cooper said. “It’s just a matter of who’s going to be that mover because the first couple of movers, they’re the ones who are going to get all of the advantage out of this. They are the ones that are going to be able to lock into a customer base and not have to ship long distances…There’s plenty of demand up there to accommodate that and continue to have supply coming from the Gulf Coast..”

“With that information in mind and considering that we’re within 700 miles of 73% of polyethylene users and 67% of polypropylene users in the United States, I think we’re in a position to create a second hub within the nation,” she said. “I think we are prepared to work hard to do that.”

Consol has had conversations about other potential projects, which “are confidential, but we’ve been talking to folks and we stay very proactive” regarding “opportunities to link our products directly to end users and find long-term win-win type of arrangements,” Rush said. “We do have incremental barrels of ethane to supply to new projects. Whether or not we participate comes down to our confidence in the company connected to the project and trust in the long-term relationship with them, and most importantly, the supply contract details…”

Can Shell’s cracker lead to more gas production? From a demand perspective, “what’s unique about this area obviously is the wet gas, and the amount of ethane that’s contained in an average barrel, which is anywhere from 60-to-70% ethane in there,” Cooper said. “That’s what makes this such a desirable area and makes this such a unique project, to be able to get into an ethane-rich environment…It just depends on where the wet gas is, and that’s what a lot of folks are interested in.”

The cracker “definitely” would allow producers to put more capital to work in the wetter side of the play, Rush added.