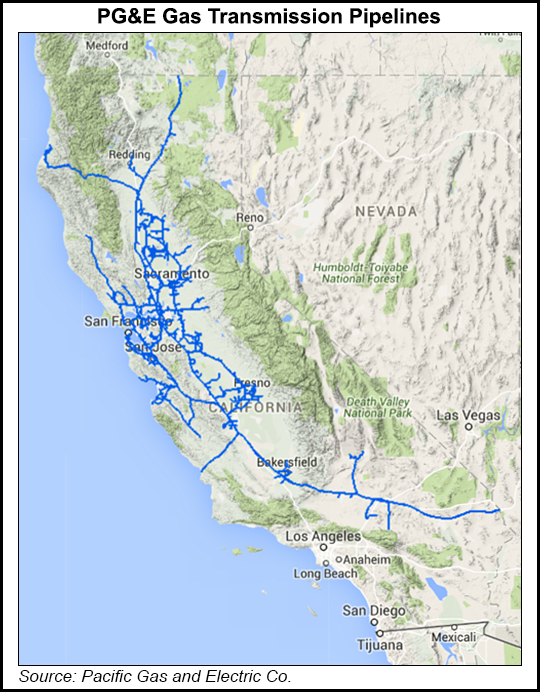 The California Public Utilities Commission (CPUC) proposal calls for an increase of $944.9 million, an estimated 47% reduction in PG&E’s request. The initial request by PG&E would cover enhanced safety and maintenance programs, including in-line pipe inspections and replacement of up to 60 miles of old high-pressure transmission pipe, the kind that failed six years ago in San Bruno, CA (see Daily GPI, Sept. 13, 2010).

A CPUC spokesperson said the proposals represent a 32.1% increase from the 2014 authorized gas transmission/storage rates for PG&E, and would mean a 10.7% monthly rate increase for residential gas customers.

Both the proposed and alternate proposed decisions call for allocating $850 million in shareholder funding for safety related pipeline/storage improvements that were previously ordered as part of the San Bruno-related penalties adopted by the CPUC (see Daily GPI, April 9, 2015).

If this option is adopted by the parties, the increase would be cut to $858.5 million, basically 20% higher than 2014 rates, and lead to a 9.9% increase in monthly residential gas bills, according to CPUC.

The proposals call for:

Parties may comment on the proposal and a public meeting will be scheduled before a vote by the five-member CPUC. The earliest the regulators could vote is June 9.