The Trump administration’s plans to repeal the Environmental Protection Agency’s Clean Power Plan (CPP) could face difficult legal challenges, and ultimately might not prove to be a boon for the coal industry, according to two energy experts. 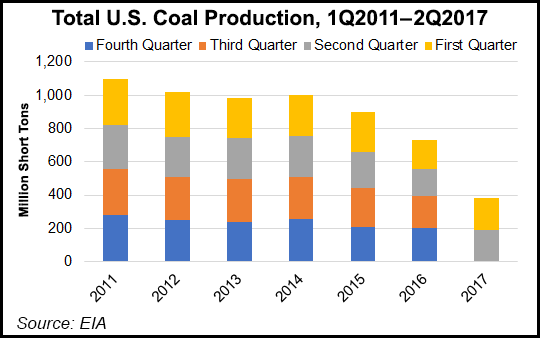 Longstreth told attendees of the Energy Bar Association’s 2017 Mid-Year Energy Forum in Washington, DC, last Tuesday that the NRDC and Trump have “obviously diametrically opposed views on the question of carbon emissions and climate change. In our view, President Trump is looking to the past, disregarding carbon pollution entirely.”

A repeal of the CPP could be a prickly proposition, Longstreth said, especially if previous setbacks in federal court over Obama-era rules are any guide. He cited an appeals court ruling against the EPA over methane rules in August, and a judge’s ruling against the Bureau of Land Management’s venting and flaring rule earlier this month.

“We think the courts will remain vigilant, as they should,” Longstreth said. “It’s my belief that the energy sector and investors know better than to follow this agenda, because they recognize how radical a turn to the past it is, and that it provides none of the long-term certainty that is needed to make big investments. In other words, no policy that is based on a denial of climate science can provide that certainty.”

“Even if they repeal the CPP or replace it with something that doesn’t require us to do very much, you still have to reckon with the fact that ultimately regulations on carbon are coming,” Longstreth quoted Thomas as saying. “So we need to develop options to deal with that, other than sticking our heads in the sand and hoping that we can just file lawsuits forever. You can either be prepared or unprepared, and that’s a pretty simple choice.”

Chupka said under several scenarios, it is possible to stimulate coal production in the United States. A repeal of the CPP and a reduction in the cost of mining coal could modestly stimulate production by about 5%, compared to the base case, and about 20% by 2030.

“If, however, you also continue to support the increased productivity of natural gas exploration and supply, and keep the price low, you will end up crushing coal in this country,” Chupka said. “There is very little that generators can do in the face of $3 gas, in terms of coal. That’s not to say coal goes away, but these are fairly deep reductions in coal production, about 30%.”

“I know the administration is actively trying to promote [coal exports], but those are pretty unpredictable markets; there might be little to be gained there,” Chupka said. Meanwhile, LNG exports are “controversial from the standpoint of other potential users of natural gas. There are many industry trade groups who do not like this effect.”

A recent Wall Street Journal article, he said “suggested that we might be moving into an era of a global glut of LNG. So the price support impact of expanded exports might not be as pronounced.”

That leaves the tariff on solar panel imports.

“This probably isn’t about coal a huge amount, but this might be irresistible for the administration in terms of its domestic manufacturing policy and other policy objectives,” Chupka said. “My guess is that they will slap tariffs on imported solar panels to poke China in the eye a little bit, and potentially increase domestic manufacturing. But that could come at a cost of overall slowing down the development of solar.”

Longstreth called the DOE’s NOPR “extraordinary” in several respects. “The first is the absolute lack of analysis to support the proposal,” the NRDC attorney said, adding that the DOE grid reliability study last summer found little to support the NOPR, and there was no quantitative analysis.

“There also is a considerable inconsistency between this proposal” and EPA Administrator Scott Pruitt’s critique of the CPP, Longstreth said. “Just about a week after the DOE proposal, Pruitt stated in announcing his repeal of the CPP that that rule ‘really was about picking winners and losers.’ I will agree with Pruitt’s characterization of the CPP, but I think it aptly describes DOE’s proposal.”

Chupka said if the NOPR “were successful at stemming premature retirements, I think nuclear plants would keep running. [But] coal is no better potentially, because it depends on how that support is structured. It could be in an energy payment, which would be very difficult to square with the operations of the energy market. It could be an availability payment, which may or may not be much for coal generation.”

He added that, according to DOE figures, 20% of the coal fleet and 5% of the nuclear fleet has retired thus far.

“Obviously coal and nuclear retirements are still likely to happen, particularly in the merchant fleet,” Chupka said. “One interesting aspect of this is the effect of the rule, as it’s structured, appears to predominantly affect the PJM market region, which has had more coal than nuclear retirements than any other region, in terms of total gigawatts [GW]. It also currently has the highest proportion of coal and nuclear plants as a percentage of generator capacity installed in the region.

“The rule would be potentially impactful of possibly up to 50 GW of merchant coal capacity. The overall impact of the rule…will depend upon the price of natural gas moving forward. At this point, it looks more like that the lower-price natural gas future is materializing, compared with some higher natural gas price futures, which will raise the cost of implementing this program.”