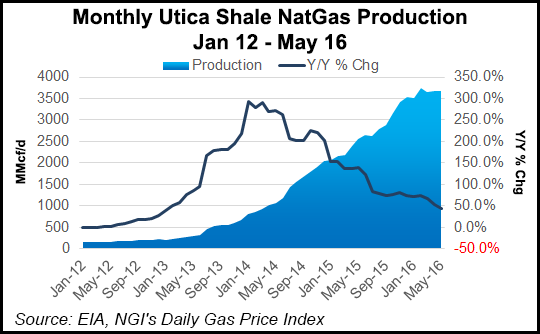 CEO Thomas Farrell said Dominion’s contractor on the Cove Point project has installed more than half of the 21,500 tons of steel needed and that 1,800 construction workers are currently on site. He said the project is 67% complete and on budget.

Asked to provide a trajectory for completion progress over the next several quarters, Farrell said, “We’re going to start commissioning middle of next year. So you’ll see that percentage continue to grow. You are in a part now…you’re laying the pipe racks and you’re laying the conduits for the wiring and putting the wiring in. The big, big chunks of progress, the rapid chunks of progress — putting in the big pieces of equipment — that’s all largely complete.

“The concrete is all poured, for example. And the sound wall is finished. We don’t have any hesitation that we’re on time and on budget and will be ready to come online late next year.”

Dominion is still waiting on regulatory approval to begin construction on its 1.5 Bcf/d Marcellus-to-Southeast Atlantic Coast Pipeline and the related Supply Header Project, Farrell said. “We have continued to respond to data requests and are quite pleased with our progress at FERC. We anticipate receiving a scheduling order very soon followed by a permit, which will allow us to begin construction by mid-2017.”

Both Atlantic Coast and the Supply Header projects are still expected to be completed by late 2018, he said.

Besides those two pipelines, Dominion has 10 pipeline growth projects under way representing $1 billion in investment and 1.5 Bcf/d of new capacity by the end of 2018, Farrell said. “The majority of our projects are demand-driven, moving gas to end-use power generation or local distribution companies,” he said.

Dominion, which owns regulated electric affiliates serving parts of Virginia and North Carolina, has been expanding its natural gas-fired generating portfolio. The utility commenced operation at its 1,358 MW Brunswick County power station in April (see Daily GPI, April 27) and has started construction on a 1,588 MW combined-cycle plant in Greensville County that is expected to go into service in late 2018 (see Daily GPI, March 30).

“We should have had five processing plants online based on forecasts that we put out at our analyst day 18 months ago,” CFO Mark McGettrick said. “We only have four online, and they are almost all at full capacity. We have not seen a big step up based on current NGLs [natural gas liquids] or oil in the basin. And we are being very cautious on Blue Racer to only invest capital when we have firm commitments from drillers.

“We have had some reach-out from producers and drillers here in the last several months inquiring about their interest in moving ahead in the last half of this year, first part of next year. But right now, I would say we are in a cautious mode on Blue Racer, and I don’t expect new processing to be put in this year and maybe not for the first half of next year.”

Stay up to date on 2Q2016 earnings and projections for the remainder of the year with NGI’s Earnings Call and Coverage sheet.