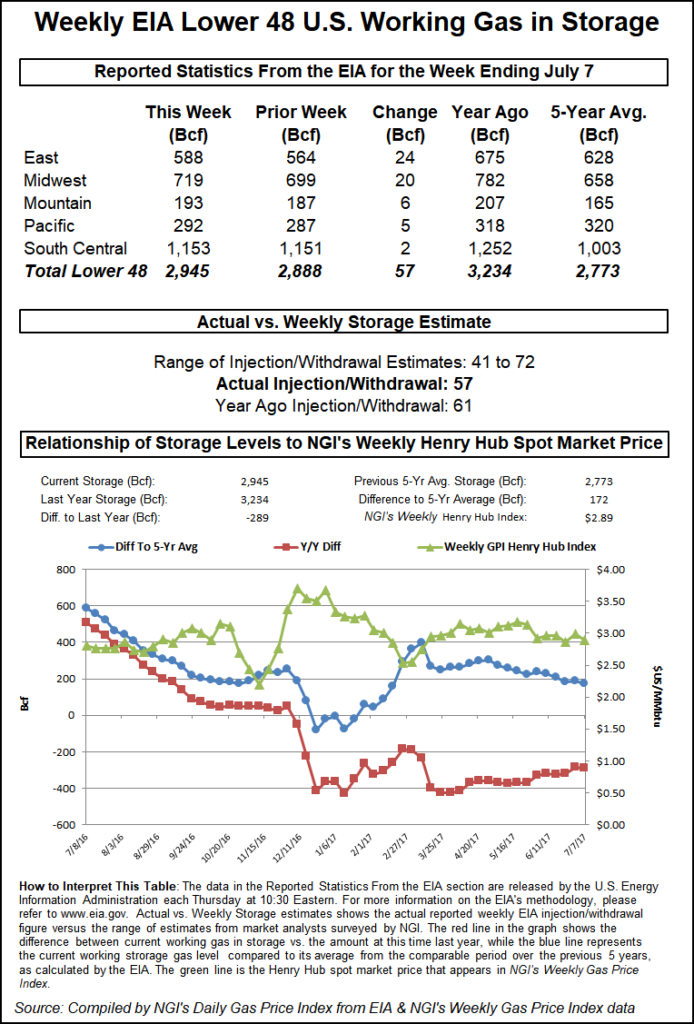 Futures markets had their own difficulties with a slightly supportive Energy Information Administration (EIA) storage report that failed to rally the bulls. EIA reported a storage build of 57 Bcf for the week ended July 7, and when the data was released prices barely budged. Analysts were expecting an injection of about 2 Bcf greater, but at the close August had fallen 2.4 cents to $2.961 and September was down 2.7 cents to $2.948. August crude oil continued its winning ways, adding 59 cents to $46.08/bbl.

Moderating temperature forecasts along with weakening next-day power prices knocked the socks off the market. AccuWeather.com forecast that Chicago’s Thursday high of 85 would plunge 10 degrees Friday to 75 before making it back to 82 by Saturday, 3 degrees below normal. Boston’s high of just 68 Thursday was seen sliding to 65 by Friday and rising to 75 by Saturday, 7 degrees below normal. Philadelphia’s scorching high of 95 Thursday was expected to drop to 84 Friday before adding 3 degrees Saturday to make it to the seasonal norm.

“It’s getting mild everywhere, at least for the next-few days,” observed a Houston pipeline veteran. “Certainly the Northeast is cooling down some. Demand has dropped off because of lower power loads.”

Declines were not quite as brutal farther west. Gas at the Chicago Citygate fetched $2.78, 8 cents less, and deliveries to the Henry Hub changed hands 4 cents lower at $2.94. Gas priced at the NGPL MIdcontinent Pool was off 4 cents to $2.67 and packages on El Paso Permian fell a nickel also to $2.54.

On the futures front, the August contract inched higher once the EIA reported a storage injection that was slightly less than what traders were expecting. The EIA reported a storage injection of 57 Bcf, about 2 Bcf less than consensus estimates. Once traders had time to digest the figures August futures rose to $3.009, but at 10:45 a.m. August was trading at $2.991, six-tenths from Wednesday’s settlement.

Prior to the report traders were looking for a storage build not far from the actual figures. Last year 61 Bcf was injected and the five-year average stands at 72 Bcf. Wells Fargo calculated a 56 Bcf injection and Raymond James estimated a 65 Bcf increase. A Reuters survey of 24 traders and analysts showed a sample mean of 59 Bcf with a range of +43 Bcf to +65 Bcf.

“It wasn’t a great surprise. We were hearing a 59 Bcf number,” said a New York floor trader. “We really have to maintain above $3 if this market is going to do anything, and a one-day settlement over $3 is meaningless. The market has no steam at this point.”

Tim Evans of Citi Futures Perspective saw the 57 Bcf increase “supportive compared with the 72 Bcf five-year average, but this was not what we’d call a surprise or a shock. Mostly, the report just removes the risk of a storage surprise for another week.”

The Wells Fargo Denver-based analytical team sees the market still undersupplied by 2 Bcf/d and “with hot temperatures forecasted for the next 2 weeks across most of the continental U.S., we expect the pace of storage injections to slow even further.

“Based on current weather forecasts as well as elevated power burn levels thus far in July (34.1 Bcf/d month-to-date versus 33.7 Bcf/d month-to-date in July 2016), our model projects a 76 Bcf cumulative storage build over the next three weeks. This would be substantially below the five-year average of 143 Bcf and would reduce the storage surplus to just 108 Bcf by the end of July.”

Inventories now stand at 2,945 Bcf and are 289 Bcf less than last year and 172 Bcf greater than the five-year average. In the East Region 24 Bcf was injected, and the Midwest Region saw inventories rise by 20 Bcf. Stocks in the Mountain Region were greater by 6 Bcf and the Pacific Region was up 5 Bcf. The South Central Region increased 2 Bcf.

Overnight weather models lost some heat. “Forecast changes were in the cooler direction along the northern tier resulting from a still active regime into the Midwest,” said MDA Weather Services in a morning six- to 10-day forecast to clients. “Despite this, most of the Midwest averages on the warm side of normal, with temperatures expected to peak in the upper 90s and near 100 in St. Louis through mid-period when ridging is strongest overhead.”

MDA added that “the Southeast trends hotter versus previous expectations and averages the period at marginally above seasonal norms. Above normal temperatures remain in place in California and the Rockies, while the seasonal monsoon in the Southwest has confidence remaining lower there.

“Still hotter risks are seen in the mid-period from the Southern Midwest to the Mid-Atlantic and points South, and slightly hotter risks in the Southwest are due to model biases with storm coverage.”