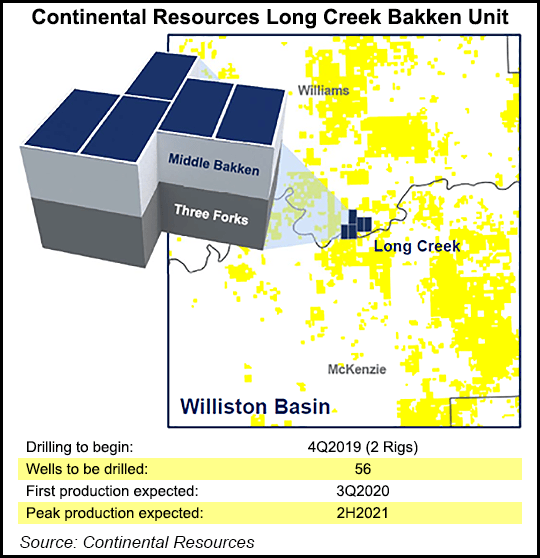 The development project covers 10 square miles and includes about 5,600 net contiguous acres in Williams County, ND. Continental expects to drill up to 56 wells in Long Creek, which would add to the five existing producing wells, to be operated with an average working interest of roughly 87%. Oil production should peak in the second half of 2021 at up to 20,000 b/d, the company said.

Pipeline infrastructure to handle all produced volumes is already under construction.

“The Long Creek Bakken Unit is another high impact oil project for Continental, much like our Project SpringBoard in Oklahoma,” said President Jack Stark. “Forming this large unit allows Continental to maximize the value of these assets by capitalizing on the efficiencies that come with row development.”

The Bakken has seen fewer larger completion projects than its lower Midcontinent and Texas counterparts, which means there are more parent wells, the original well in a unit, that are underdeveloped, said exploration Vice President Tony Barrett.

Roughly half of the Long Creek wells would be drilled in the Middle Bakken, and the other half in the Three Forks. Well spacing would be consistent with Continental’s past drilling practice in the region, Barrett said.

“SpringBoard was not a one time thing, it’s translatable to multiple basins,” said Stark.

Project SpringBoard launched in 2018 as part of a broader strategy of pivoting to more oil-weighted assets in the Anadarko Basin. As a result, 2Q2019 south production rose by 10% year/year, averaging 128,777 boe/d. Continental’s growth target for SpringBoard is average oil production of 22,000 b/d in the fourth quarter. July oil production totaled 19,000 b/d.