Continental Resources Inc. reported better-than-expected natural gas production from its home base of Oklahoma for the third quarter of 2021. 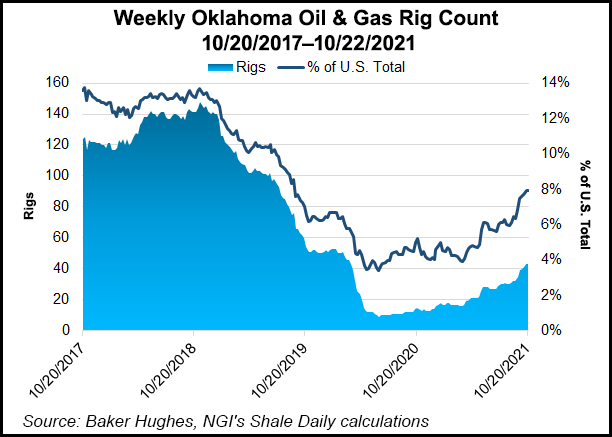 The Oklahoma City-based independent plans to maintain an emphasis on natural gas projects in the Sooner State amid the higher price environment.

“We have elected to continue focusing on natural gas developments in Oklahoma based on favorable market conditions,” CEO Bill Berry said Tuesday. “This resulted in an approximately 80 MMcf/d increase in natural gas and 4 million b/d reduction in oil to third quarter 2021 production results in Oklahoma versus prior projections.”

During the quarter, Continental’s oil production averaged 157.2 million b/d and gas production 1,046 MMcf/d. For the period, Raymond James and the Street had anticipated 6% higher oil output and 7-8% lower gas output.

Encouraging Oklahoma natural gas market conditions for Continental align with broader positive sentiment for the gas sector. Raymond James earlier this week bolstered its already bullish natural gas price forecasts through 2022. South of the Red River, Kinder Morgan Inc. management said conversations with producers have become much more “lively,” though growth is expected to be slower than when the market has emerged from previous downturns. To be sure, Lower 48 gas producers have been less aggressive than usual in ramping up output to take advantage of higher prices.

Although not scheduled to report 3Q2021 earnings until Nov. 4, Continental said Tuesday that it generated about $1.02 billion of cash flow from operations and a record $669 million of free cash flow (FCF) for the period. Raymond James observed Continental’s latest operations cash flow figure aligns with its prediction for the quarter, adding that the E&P’s most recent FCF number marks a 6% quarter/quarter increase.

Raymond James also stated that Continental’s roughly $384 million in non-acquisition capital expenditures for the third quarter fell short of the $393 million estimated by analysts. Continental also reported that it held $4.05 billion in net debt — $4.74 billion of total debt against a $694 million cash balance — as of Sept. 30.

Continental’s acreage spans the Bakken Shale in North Dakota and Montana, the South Central Oklahoma Oil Province, aka the SCOOP, and the STACK, or the Sooner Trend of the Anadarko Basin, mostly in Canadian and Kingfisher counties in Oklahoma, and the Powder River Basin in Wyoming.