Executives at Continental Resources Inc. said the third quarter of 2013 was a “milestone” for the company, with record total net production and the first of four density tests completed in the Middle Bakken/Three Forks formation. 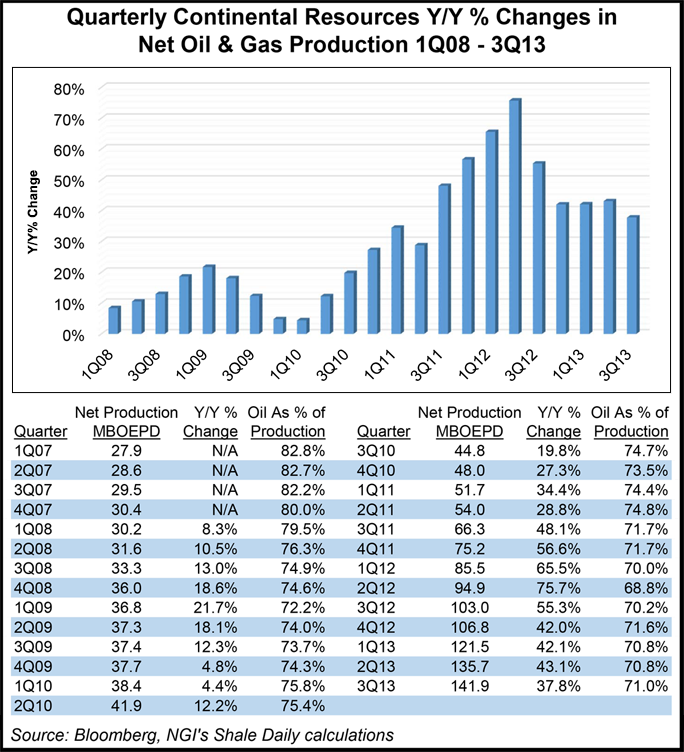 Most of the output came from wells in Continental’s bread and butter: the North Dakota portion of the Bakken, where production year/year increased 45.8% to 81,545 boe/d from 55,918 boe/d to. Wells on the Montana side also nearly double production from a year ago, climbing to 12,957 boe/d from 6,535 boe/d. Combined, production from the Bakken Shale increased 51.3% from 3Q2012..

“I’ve said many times, there’s only one Bakken,” CEO Harold Hamm said last week during a conference call to discuss 3Q2013 results. “It’s the most important oil discovery in the past 50 years…and it’s just getting started. The Bakken will soon surpass 1 million boe/d of production, and I expect it to double again within 10 years.”

During the quarter, Continental completed the first of four density pilots in the Bakken/Three Forks formation. The 14-well Hawkinson unit is targeting the Middle Bakken and the first, second and third benches of the Three Forks where wells tested at a combined rate of 14,850 boe/d.

“We’re not headed down this road alone,” President Rick Bott said. “We’re pleased to see other operators prosecute their own tighter density drilling pilot projects. The news in the Bakken just keeps getting better.”

Bott added that Continental has three more density projects in various stages of completion. The Rollefstad and Tangsrud units were being drilled similar to Hawkinson, with a 1,320-foot well spacing, while the Wahpeton unit was being drilled at 660-foot spacing. Results from all three units were expected in early 2014.

“From what we’ve learned, we’re planning three more density pilot projects in 2014 in the Hartman, Lawrence and Mack spacing units,” Bott said, adding that these would be performed “to test tighter spacing and further validate our full field development concept, including these deeper benches.”

The company also reported a surge in production from the South Central Oklahoma Oil Province (SCOOP), a legacy shale play that Continental claims is geographically similar to the Bakken, Marcellus and Eagle Ford shales (see Shale Daily, Oct. 11, 2012). SCOOP production was 20,070 boe/d in 3Q2013, up almost 300% (292.9%) higher from year-ago output of 5,108 boe/d.

Bott said six of the 12 operated rigs in the SCOOP were drilling cross-unit wells with 9,500-foot laterals. Continental is “continuing to delineate the play, east and south, expanding the de-risk footprint.”

“The Bakken’s top producer is investing an increasing amount of its capital into the SCOOP to fuel the next phase of its growth,” Motley Fool contributor Matt DiLallo said in a note. “Next year, Continental will invest a quarter of its capital budget on the play. That capital will be used to grow its rig count from 10 to 18, which will provide a big boost to production.

“Overall, the SCOOP is a critical component of [Continental’s] plans to triple its production and reserves by 2017.”