Growth in North American natural gas traffic is migrating south to Mexico from Canada, according to the latest trade scorecard of the United States Department of Energy (DOE). 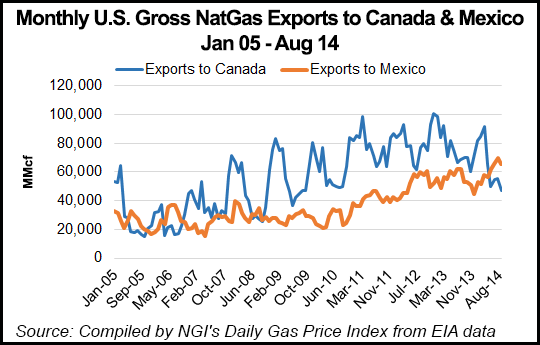 Across the Canadian border, south- and northbound deliveries both shrank in the first half of this year. But shipments surged into Mexico from the United States, said DOE’s Office of Fossil Energy.

In May, U.S. exporters scored a month of higher sales in Mexico than in Canada for the first time since 2008. In June, southbound pipeline deliveries of U.S. production into Mexico set a record near 2.2 Bcf/d.

“This milestone illustrates a distinct upward trend in exports to Mexico,” DOE said, adding that the southern shift in continental trading patterns “is further apparent in specific plans to export more U.S. gas.

“Projects like Net Midstream’s NET Mexico pipeline, which will connect the Agua Dulce Hub in Texas to a new pipeline in Mexico and increase U.S. export capacity by 2.1 Bcf/d, are under way. Preliminary third quarter data show an extension of this trend.” Net Mexico was due to go into service in mid-November. Another project, the Sierrita Pipeline, started up in October with a capacity of 200 MMcf/d from a border connection south of Tucson (see Daily GPI, Oct. 30; Oct. 31).

But the duration and strength of the continental shift in trading patterns remain far from easy to predict. “Future levels of exports to Canada and Mexico will depend on a number of factors, including U.S. gas market developments, economic activity and infrastructure development, and the countries’ success in developing their own natural gas resources.”

The value of the gas trade rose on all fronts, thanks to heating season market highs driven by the severe 2013-14 winter across North America.

The value of Canadian exports is an average received for shipments to variable markets across the U.S. from New York to Los Angeles. U.S. gas exports are concentrated in Canada’s highest-priced energy markets in Ontario and Quebec.

The Canada-U.S. trade, still the largest part of continental traffic in gas, remains in a holding pattern while decisions are made on a proposed overhaul of pipeline services north of the U.S. border. A ruling is awaited from the National Energy Board on a settlement on co-operative capacity additions between TransCanada Corp. and the nation’s three largest distribution companies: Union Gas (Spectra) Enbridge Gas in Ontario, and Gaz Metropolitain in Quebec.

The outlook is also clouded by an emerging dispute over the size and costs of replacement capacity to compensate for planned partial conversion of TransCanada’s gas Mainline to oil service by its C$12 billion (US$10.7 billion) Energy East project.