After curtailing production in the second quarter amid the extraordinary disruptions caused by the coronavirus pandemic, Continental Resources Inc. (CLR) expects to boost cash flow at $40/bbl West Texas Intermediate (WTI) pricing as it looks to ramp up output through the end of the year, management said. 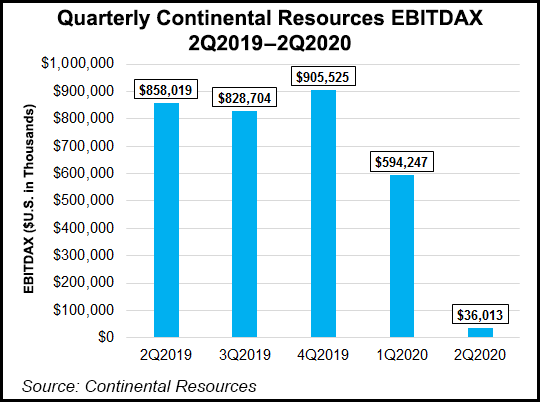 The Oklahoma City-based independent in its 2Q2020 earnings results, also reduced its full-year 2020 production guidance after reporting sharply lower output during the quarter.

“At the time of our last call, WTI was at $24/bbl,” founder and Executive Chairman Harold Hamm said during a conference call on Tuesday. “As we anticipated, we’ve seen prices improve to the $40/bbl range as economies open up and people get back to work. We believed we could see this initial improvement in prices when we made the decision to curtail 70% of our operated oil volumes in May and June.

“Recent global crude oil inventory data, initial demand recovery and anecdotal evidence from industry participants suggest supply and demand are rebalancing.” The decision “to defer and thereby preserve our production for the future has proven to be a value-enhancing strategy.”

Despite volatility in the near-term, “ongoing inventory rebalancing” in the second half of 2020 will “position us nicely for 2021 and beyond,” Hamm added.

Deferring production during the second quarter should enable the company to generate an estimated $90 million in incremental cash flow from operations at $40 WTI, management said.

CLR’s operations are split primarily between the Bakken Shale to the north and to the south in Oklahoma’s two big reservoirs, the STACK (Sooner Trend of the Anadarko Basin, mostly in Canadian and Kingfisher counties) and SCOOP (South Central Oklahoma Oil Province).

“Continental demonstrated a proactive first-mover response to the unprecedented events that have shaped the global commodity landscape in 2020,” CEO Bill Berry said. “…We have prudently responded to demand destruction attributable to Covid by preserving this production for a better market environment.”

Pressure from Covid-19 saw debt increase during the quarter, but controlling costs and reducing debt remains the name of the game for CLR moving forward, management said.

“On the back of lower commodity prices and curtailed production, our net debt increased slightly in the second quarter,” CFO John Hart said. “Based on our current forecast, we believe our total debt has peaked in July and should decline through the balance of 2020 and continue during 2021 and beyond…While Covid has caused a momentary blip, it has not impacted our strategy.”

The independent remains on track for a revised 2020 capital expenditure budget of $1.2 billion, versus the previously contemplated $2.65 billion.

CLR reported an average net sales price for the quarter of $16.35 for oil, versus $32.37 in the year-ago quarter. The operator’s average natural gas sales price totaled 12 cents/Mcf, and the average per Boe price came to $7.88. That’s compared with 59 cents and $18.56, respectively, in the year-ago period.