Despite registering a $100 million-plus loss during 1Q2015, Continental Resources Inc. increased production and completed an important density test in a legacy shale play in Oklahoma during the period as it looks to continue weathering the global decline in world oil prices by reducing drilling and completion costs. 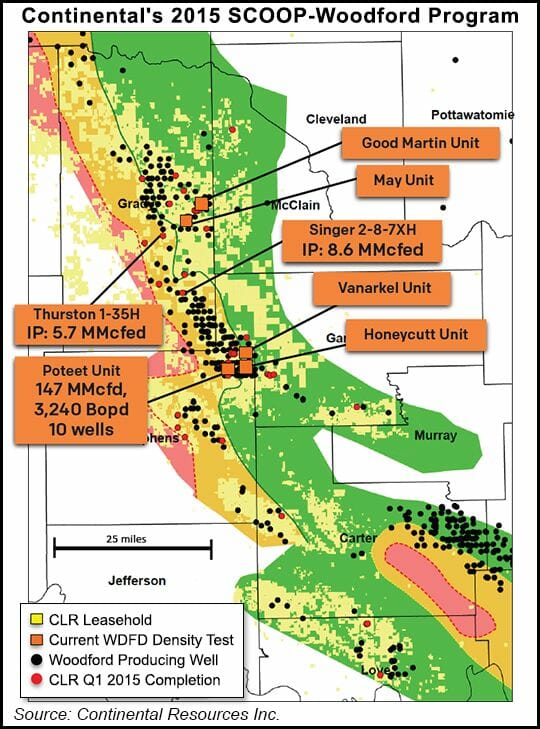 During the quarter, Oklahoma City-based Continental completed density testing in its Poteet project area, located in the condensate window of the South Central Oklahoma Oil Province (SCOOP), a play the company says is similar to the Bakken, Marcellus and Eagle Ford shales (see Shale Daily, Oct. 11, 2012).

Continental said 10 wells in its Poteet unit that targeted the Woodford Shale part of the SCOOP had a combined peak production rate of 147 MMcf/d of natural gas and 3,240 b/d of oil. Cumulative production to date was 6.5 Bcf of gas and 131,800 bbl of oil.

“These Poteet tests are really performing right in line with what other wells in that area have done,” COO Jack Stark said during a conference call to discuss 1Q2015 results on Thursday. “I’m impressed with how they’re performing here early time…This is a very good area, but these wells are really performing in-line or even above the offsets around here, there’s no doubt about that.”

Continental also completed a four-well density pilot program in its Jeanna unit, part of the company’s efforts to target the Springer Shale portion of the SCOOP. The company reported that the four wells had combined peak production rates of 4.4 MMcf/d of gas and 3,123 b/d of oil.

Stark said there wasn’t anything unique about the completions of the pilot wells. “The fact that we’ve actually looked at harvesting this with the upper and lower half being penetrated here may actually be part of how these wells are performing quite well,” he said of the Poteet wells. “This is part of why we’re doing these density tests. We’re trying to find out what is the optimum pattern for development when we’re this thick.

“What excites me about this test is that we’ve got more than 50,000 net acres that have 300 feet of thickness of Woodford or greater. When you consider developing those net acres — say with 7,500-foot laterals on this density — you end up with more than 500 net wells that could be drilled in those areas, and in some of these areas it gets upwards of 900 feet thick. So when you start putting the reserve model to that number of number of net wells, you’re looking at something that’s [approximately] 1.5 million boe per well, [with] 750,000 bbl to 1 million bbl net to the company.

“It validates what we’ve said back in September — that the potential of this SCOOP area basically competes head-to-head with the Bakken.”

The company kept to its script in the Bakken, reducing the average number of rigs deployed there to 13 during the first quarter, and with plans to lower it even further to average 10 through the remainder of the year (see Shale Daily, Feb. 25). Continental said it completed 199 gross (66 net) operated and non-operated wells targeting the Middle Bakken and Three Forks formation during 1Q2015.

Meanwhile in the SCOOP, Continental said it plans to average between nine and 11 operated rigs targeting the Woodford Shale, as well as one to three operated rigs targeting the Springer Shale, through the remainder of the year. The company completed 59 gross (25 net) operated and non-operated wells in the Woodford, and 15 gross (11 net) wells in the Springer, during the first quarter.

During 1Q2015, Continental began drilling on acreage in the northwest Cana-Woodford Shale, where it has a joint development agreement (JDA) with SK E&S, a subsidiary of South Korea’s SK Group (see Shale Daily, Oct. 27, 2014). The company completed its first well — Schantz #1-5-8XH, located in Blaine County, OK — under the JDA in April, with early flow results of 14 MMcf/d.

The company said its non-acquisition capital expenditures (capex) budget for 2015 remains $2.7 billion, with 65% ($1.55 billion) devoted to drilling in the Bakken, 31% ($720 million) earmarked for the SCOOP and 4% ($100 million) for drilling in the Cana JDA and elsewhere (see Shale Daily, Dec. 23, 2014). At Thursday’s conference, CFO John Hart said the company would spend two-thirds of its capex budget during the first half of 2015, and the remaining third during the last half.

CEO Harold Hamm said the company would like to see oil prices at $70/bbl before it considers adding more rigs. It plans to average 31 rigs total in 2015.

“$70/bbl is a price that turns it on for us,” Hamm said Thursday. “We could see that happening in several instances. As we started looking at this short supply situation…with the amount of rigs that’s been shut down, that could happen fairly soon. Also, if we didn’t have to discount oil into the market, as we are right now due to this refinery shortage situation for light tight oil, you could gain quite a bit as well. So that [price] could be reached quickly.”

Continental said drilling and completion costs for most of its operated wells declined about 15% since the end of 2014, attributing the decline to lower service costs. The company estimated that drilling and completion costs for operated wells in the Bakken have decreased to $8.2 million per well, based on a two-mile lateral with an enhanced completion design. By comparison, such a well would have cost $9.6 million at the end of 2014.

Similarly, Continental said a SCOOP-Woodford well, with a 7,500-foot lateral, would have cost $12.2 million at the end of 2014, but was $10.4 million now. It expects to reduce service costs by 20% by mid-2015, through drilling and completion efficiencies.

“We’ve argued that Continental provides both oil beta plus underappreciated quality in that its corporate returns and ability to achieve top-tier growth within cash flow differentiate it, versus better owned Permian E&Ps.”

In a separate note, Jefferies LLC concurred, adding that in the Poteet project area “we would like to see longer production history to monitor whether there is any interference between the wells. If successful, this would potentially increase potential locations and reserves to our valuation model.”

With the hottest week of the summer just around the corner, natural gas futures rebounded early Monday. The September Nymex gas futures contract was flirting with the $4.000/MMBtu mark again, trading 6.3 cents higher at $3.977 at around 8:45 a.m. ET. Long-range outlooks showed stronger ridging in the eastern United States next week, giving a…