ConocoPhillips said it will stick with plans to spend $6.1 billion on capital expenditures (capex) in 2019, more than half of which would be devoted to unconventionals in the Lower 48 and Canada, while continuing with a $3 billion share buyback program. 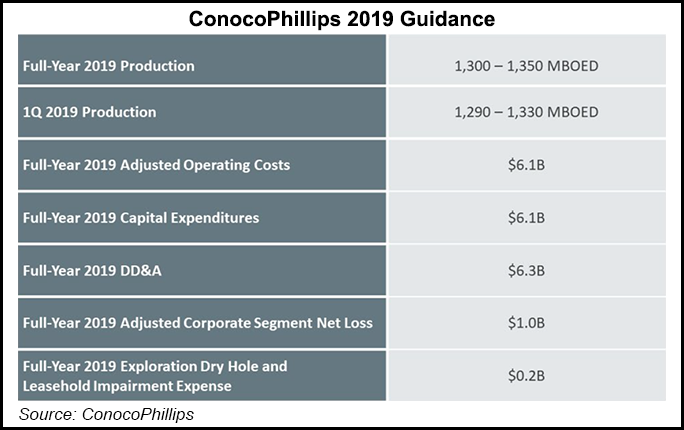 The Houston-based super independent said it also expects full-year production, excluding Libya, to be 1.3-1.35 million boe/d in 2019, with 1Q2019 production expected at 1.29-1.33 million boe/d. Production now is forecast to ramp up in the second half of the year.

“We believe our 2019 operating plan reflects what you currently expect from us,” CEO Ryan Lance said during a conference call Thursday. “It’s consistent with our priorities, focused on growing long-term value and underpinned by our commitment to strong execution…It’s a formula we believe it works and we’re sticking to it.” The capex budget for 2019 is essentially flat from 2018.

Lance reiterated plans to advance construction of the Greater Mooses Tooth No. 2 project in Alaska, where another season of exploration and appraisal drilling is planned at the Willow and Narwhal prospects. The 14-well pad program in Canada’s Montney Shale also is “in full swing.”

The company plans to grow unconventional production in the “Big 3” — the Eagle Ford and Bakken shales and the Permian Basin’s Delaware sub-basin — by about 19% in 2019. Activities early this year include testing new completion techniques, including its Vintage 5 program and refractures.

“During these activities we expect volumes in the Big 3 to be relatively flat in the first half and ramp up in the second half of the year,” Lance said. Results from a four-well exploration program in Louisiana’s Austin Chalk are expected later this year.

COO Matt Fox said ConocoPhillips is running an 11-rig drilling program, with six rigs deployed in the Eagle Ford, three in the Bakken and two in the Permian. The company dropped one rig in the Eagle Ford at the beginning of the year “to optimize the ratio of our rigs to completion crews….”

If rigs are run continuously in the Eagle Ford, “we ultimately reach a plateau, and we’d be able to hold that plateau for well over a decade, maybe two decades,” Fox said. “In the Bakken, we felt we had a plateau, but we had some improved results from our drilling and completions there and we had more partner operated activity. So we are now at a higher rate than we anticipated and that can probably be sustained close to that rate for a decade or more.

“And then of course on the Permian, we’re very early in the lifecycle there. So that’s several years of growth ahead of it, before it reaches a plateau.”