An internal investigation from ConocoPhillips into a recent gas leak at a site in Alaska’s North Slope points to extreme pressure that caused well equipment to fail, releasing a pocket of gas to the surface. 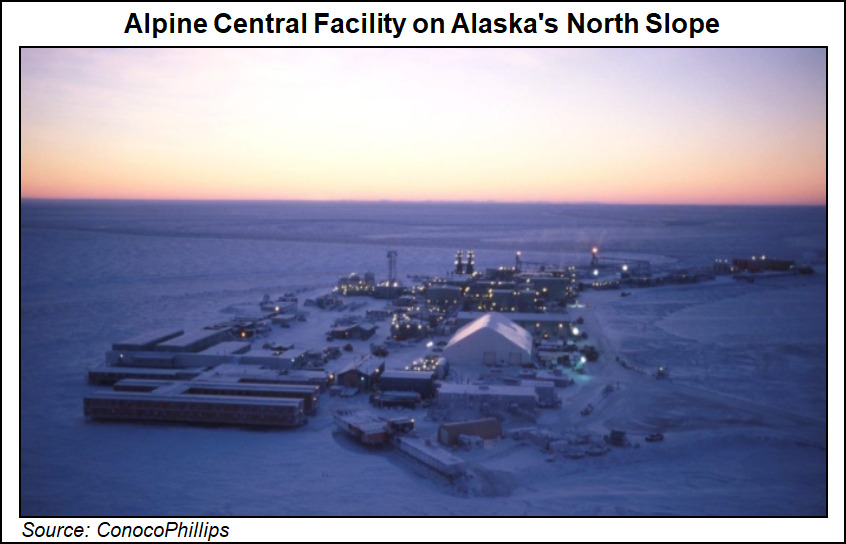 The report comes more than two months after a leak occurred at one of the Houston-based independent’s oldest Alpine Field drilling pads in the resource-rich North Slope. A leak was detected on March 4 during drilling and released an estimated 7.2 MMcf of natural gas until the company could route the flow to a disposal well on March 8.

The company identified the leak source as a shallow pocket underground that previously went unnoticed in surface scans. Shortly after a critical piece of the well failed, gas was detected from several areas around the well.

After the investigation, ConocoPhillips concluded that a massive buildup of pressure while it was protecting its equipment from permafrost caused a casing shoe to fail. A casing shoe is used to help cement a casing to rock, stabilizing the structure.

No injuries or impacts to the tundra were reported in association with the leak, according to the company.

Rebecca Boys, a spokesperson with ConocoPhillips Alaska, told NGI that the company saw a production impact of up to 8,000 boe/d in the Alpine field during the leak response that started in March.

Production has now increased to near “pre-event levels,” Boys said, but the company is still waiting for approval from regulators before restarting operations at its CD1 well pad where the leak occurred.

“It is not known at this time when production at CD1 will come back online, and CD1 production will re-commence after appropriate engagement with and approval from the Alaska Oil and Gas Conservation Commission (AOGCC),” Boys said.

Moving forward, the company said it identified in its investigation a list of corrective actions it will use during drilling on the North Slope. ConocoPhillips reported it would develop a standard for its freeze protection operations that would include pressure limits and contingencies for how to handle future leaks. It is also considering using pressure sensors on drilling rigs.

The company submitted its final report to the AOGCC on May 3.

ConocoPhillips Alaska celebrated its 20th anniversary of operations in the Alpine field last year. Its remote Alpine center is seven miles from the Beaufort Sea of the Arctic Ocean and must be supplied yearly over ice roads.

Earlier in the year, ConocoPhillips CEO Ryan Lance called Alaska an important piece of the company’s goal of moving more low-cost gas and oil to market. The company secured a combined production of 208 million boe/d out of Alaska in 1Q2022, making it the second highest producing territory for the company behind its Lower 48 assets.